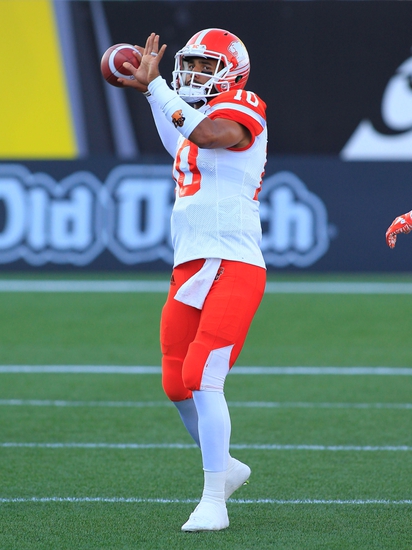 The Edmonton Eskimos and BC Lions meet Saturday in CFL action at BC Place.

The Edmonton Eskimos look for a third straight victory to get to double-digit wins on the season. The Edmonton Eskimos have split their last six road games. Mike Reilly is completing 67.4 percent of his passes for 4,855 yards, 25 touchdowns and 13 interceptions. Reilly has two or more touchdown passes in nine of his last 12 games. Brandon Zylstra and D'haquille Williams have combined for 2,197 receiving yards and eight touchdowns while Vidal Hazelton has 42 receptions. The Edmonton Eskimos ground game is averaging 95.9 yards per contest, and LaDarius Perkins leads the way with 319 yards and one touchdown. Defensively, Edmonton is allowing 28.9 points and 370.5 yards per game. Kenny Ladler leads the Edmonton Eskimos with 75 tackles, Odell Willis has eight sacks and Johnny Adams has two interceptions.

The BC Lions are getting desperate for a victory in order to snap a four-game losing streak. The BC Lions have lost three of their last four home games. Jonathon Jennings is completing 63.7 percent of his passes for 2,874 yards, 11 touchdowns and 15 interceptions. Jennings and Travis Lulay have combined for 21 touchdown passes and 22 interceptions this season. Emmanuel Arceneaux and Bryan Burnham have combined for 1,886 receiving yards and 11 touchdowns while Shaquille Johnson has 27 receptions. The BC Lions ground game is averaging 95.8 yards per contest, and Jeremiah Johnson leads the way with 854 yards and eight touchdowns. Defensively, BC is allowing 26.6 points and 373.8 yards per game. Solomon Elimimian leads the BC Lions with 119 tackles, Craig Roh has eight sacks and Ronnie Yell has three interceptions.

Edmonton has beaten BC in eight of the last nine meetings, including twice this season. However, neither one of these teams are playing great football at the moment, especially the Lions who are being outscored by four points in their last three games. I'm not sure why BC is the favored team in this spot given its recent form and its history against Edmonton. This may be a trap, but I'll take the Eskimos and the free two points.