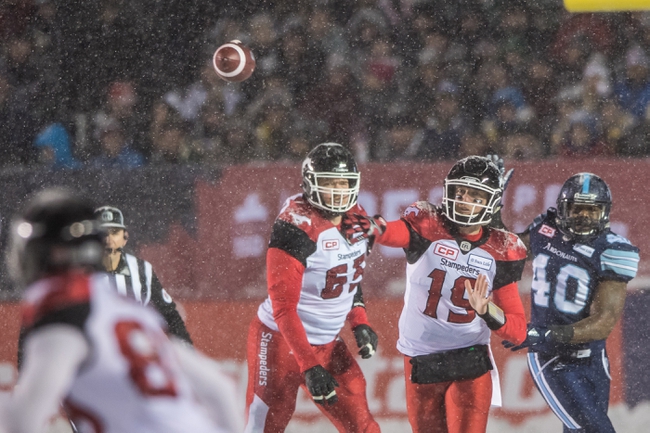 The Hamilton Tiger-Cats have won a combined 13 games in the last two seasons and are kind of desperate for a spark to get this squad back on track. The addition of Johnny Manziel could be the shot in the arm that was needed. Manziel played well in the preseason, and I doubt Hamilton went through all the drama to bring him in just to keep him on the bench. So, while Jeremiah Masoli had his moments last year and takes care of the football, it’s only a matter of time before the Texas A&M star takes over, making the Tiger-Cats possibly the most interesting team at least for American fans. Hamilton also has its top two receivers from last year in Jalen Saunders and Luke Tasker, a duo that combined for more than 2,300 yards and 11 touchdowns. Defensively, Hamilton was awful last season, but the return of key players such as Simoni Lawrence, Larry Dean and Richard Leonard should help.The Hamilton Tiger-Cats haven’t missed the playoffs back-to-back years since 2007-08.

The Calgary Stampeders have to be the most motivated club in the world after losing the Grey Cup in heartbreak fashion each of the last two years. Then again, that could also deflate a team and result in their first mediocre season probably since 2011 when Calgary finished 11-7. Calgary still has the face of its franchise in quarterback Bo Levi Mitchell, a guy who has over 19,000 yards and 115 touchdowns in just four full years of starting, and he makes this club a legit title contender as long as he’s healthy. It doesn’t matter the names around him, Levi Mitchell is the one player who makes this engine go and makes everyone around him better. Defensively, Calgary was easily the best defensive team last year, allowing just 349 points and producing 50 sacks. The return of Micah Johnson, Ja'Gared Davis and Ciante Evans will make sure that side of the ball remains solid. The Calgary Stampeders are 1-1-1 SU in their last three season openers.

The Calgary Stampeders have been covering machines the last couple of years, especially at home and early in the season. The last time Hamilton went to Calagary, it lost 60-1. There's more excitement surrounding the Hamilton Tiger-Cats with Manziel, but there's still questions with this team as a whole and they're certainly not ready to play with the big boys. At least not yet anyway. Opening games are tricky, but based on the Stampeders track record, I'll predict a double-digit victory.