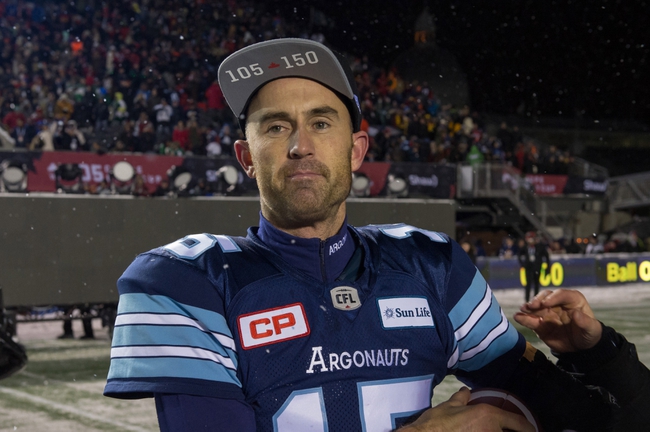 The BC Lions and Toronto Argonauts meet Saturday in CFL action at BMO Field.

The BC Lions look for back-to-back wins for the first time to get back to a .500 record. The BC Lions have lost all four road games this season. Travis Lulay is completing 62.4 percent of his passes for 1,171 yards, five touchdowns and three interceptions. Jonathon Jennings and Lulay have combined for seven touchdown passes and six interceptions this season. Emmanuel Arceneaux and Bryan Burnham have combined for 755 receiving yards and two touchdowns while Ricky Collins has 24 receptions. The BC Lions ground game is averaging 90 yards per contest, and Jeremiah Johnson leads the way with 272 yards and three touchdowns. Defensively, BC is allowing 26.9 points and 411.6 yards per game. Garry Peters leads the BC Lions with 31 tackles, Odell Willis has five sacks and Winston Rose has three interceptions.

The away team has won each of the last eight meetings between Toronto and BC, as July of 2013 was the last time a home team won a game between these two clubs. The Toronto Argonauts are coming off a bye, which does hold value, but I'm not sure it matters that much when you consider they've been outscored by nearly 12 points on the season and exactly 12 points at home. The BC Lions are coming off their best win of the season and have been tough on the road despite losing. This is where BC gets back-to-back victories.