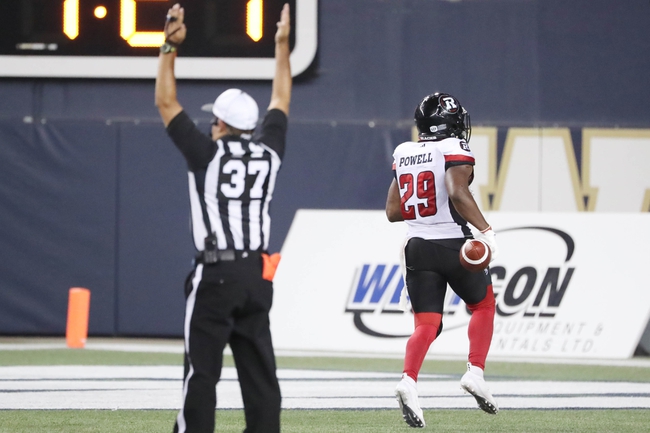 The Ottawa Redblacks look for a bounce back victory after losing their last two games. The Ottawa Redblacks have split their last six home games. Trevor Harris is completing 69.4 percent of his passes for 4,508 yards, 18 touchdowns and 11 interceptions. Harris has two or more touchdown passes in nine of his last 19 games. Brad Sinopoli and Greg Ellingson have combined for 2,163 receiving yards and seven touchdowns while Diontae Spencer has 74 receptions. The Ottawa Redblacks ground game is averaging 96.9 yards per contest, and William Powell leads the way with 1,275 yards and six touchdowns. Defensively, Ottawa is allowing 24.5 points and 372.5 yards per game. Corey Tindal leads the Ottawa Redblacks with 62 tackles, A.C. Leonard has six sacks and Jonathan Rose has five interceptions.

The Ottawa Redblacks have won seven of the last nine meetings against the Hamilton Tiger-Cats, which included a six point win in the last meeting on the road. Hamilton is obviously playing better football at the moment and Ottawa is a rough 2-5 ATS at home this season, however, it's toguh to ignore the history between these teams. In a toss-up contest with so much on the line in terms of the East Division, I want the Redblacks at home.