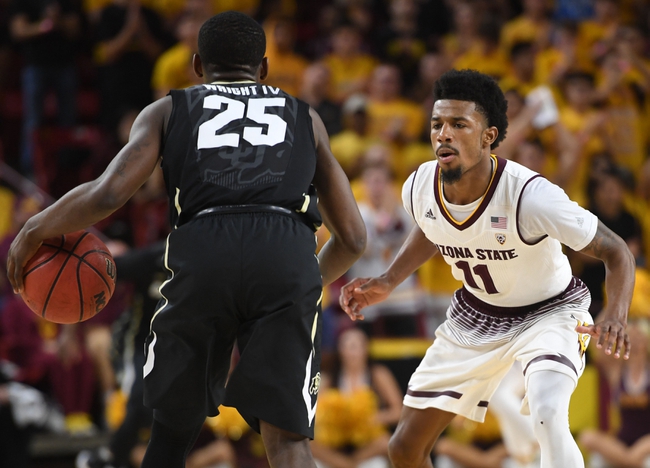 The Arizona State Sun Devils and Colorado Buffaloes will face off at T-Mobile Arena this Wednesday afternoon in the 1st round of the Pac-12 Men’s Tournament.

The Arizona State Sun Devils finished their regular season with an overall record of 20-10 and earned the 9-seed in the Pac-12 Men’s Tournament after finishing conference play with an 8-10 record. Arizona State started their season on fire, winning their first 12 games and was ranked as high as 3rd in the country, however, the Sun Devils really struggled in Pac-12 play and will probably need a win or two to ensure an NCAA bid. Arizona State was led by their offense this season which currently ranks 18th in scoring offense and 95th in FG%. On the season, Arizona State is averaging 83.5 ppg on 46.4% shooting from the field. The Sun Devils are averaging 8.8 three-pointers per game on 36.2% shooting from beyond the arc. Offensviely, Arizona State has been led by Tra Holder (18.6 ppg, 4.2 rpg, 3.5 apg, 1.3 spg), Shannon Evans II (16.7 ppg, 3.3 rpg, 3.6 apg, 1.5 spg), Kodi Justice (12.5 ppg, 2.7 rpg, 1.8 apg, 1.2 spg), and Romello White (10.8 ppg, 7.3 rpg). Defensively, Arizona State is allowing their opponents to average 74.6 ppg on 43.6% shooting from the field. The Sun Devils have a rebound margin of -1.0 and a turnover margin of 4.2.

The Colorado Buffaloes finished their regular season with an overall record of 16-14 and come into the Pac-12 Men’s Championship as the 8-seed after finishing conference play with an 8-10 record. Colorado picked up some nice wins this season, including a great home victory over the Arizona Wildcats, however, the Buffaloes don’t have much momentum coming into the Pac-12 Tournament as the Buffaloes have lost 4 of their last 5 games. Colorado has struggled a bit offensively as they rank just 241st in scoring offense, however, the Buffaloes have been good defensively as they currently rank 72nd in defensive FG% and 63rd in rebound margin. On the season, Colorado is averaging 71.4 ppg on 43.8% shooting from the field. The Buffaloes are averaging 7.4 three-pointers per game on 35.3% shooting from beyond the arc. Offensviely, Colorado has been led by McKinley Wright IV (14.2 ppg, 4.6 rpg, 5.3 apg, 1.0 spg), George King (12.8 ppg, 8.0 rpg, 1.1 apg), Namon Wright (10.1 ppg, 3.7 rpg, 1.1 apg), and Dominique Collier (7.3 ppg, 1.6 rpg, 1.4 apg). Defensively, Colorado is allowing their opponents to average 72.3 ppg on 42.1% shooting from the field. The Buffaloes have a rebound margin of 3.5 and a turnover margin of -3.4.

Arizona State and Colorado split their regular season series as the Sun Devils won by an 80-66 margin at home in late January, while losing a 90-81 (OT) battle at Colorado in early January.

Although Arizona State has struggled in conference play this season, this is still a team that has an offense that can just flat our run you out of the gym. Colorado’s defense is their strength however, I don’t think the Buffaloes will be able to slow down the Sun Devils in this one and as Colorado is just not that great of a team when they are outside of Boulder, I’m taking Arizona State to cover this spread.