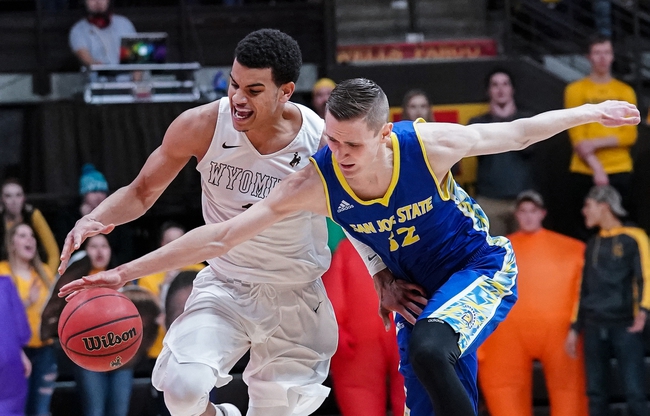 The San Jose State Spartans and Wyoming Cowboys will square off at the Thomas & Mack Center this Wednesday night in the 1st round of the Mountain West Men’s Championship.

The San Jose State Spartans had a long season and the Spartans finished their year with an overall record of 4-25 and earned the 11-seed in the Mountain West Men’s Championship after finishing with a 1-17 conference record. San Jose State had to be happy that they were able to pick up at least one conference win this season after defeating Utah State at home last week, however, it’s hard to imagine that the Spartans have high hopes in this one after picking up just four wins on the season. San Jose State struggled on both ends of the court this season as they rank just 325th in scoring offense and 256th in scoring defense. On the season, San Jose State is averaging 66.0 ppg on 43.6% shooting from the field. The Spartans are averaging 5.9 three-pointers per game on 36.4% shooting from beyond the arc. Offensively, San Jose State has been led by Ryan Welage (17. Ppg, 5.4 rpg, 1.4 apg), Keith Fisher III (10.6 ppg, 6.4 rpg), Jaycee Hillsman (9.1 ppg, 4.2 rpg, 2.3 apg), and Oumar Barry (5.8 ppg, 3.2 rpg). Defensively, San Jose State is allowing their opponents to average 75.4 ppg on 43.5% shooting from the field. The Spartans have a rebound margin of 3.7 and a turnover margin of -5.7.

The Wyoming Cowboys finished their year with an overall record of 19-12 and come into the Mountain West Men’s Championship as the 6-seed after finishing conference play with a 10-8 record. Wyoming struggled a bit down the stretch as the Cowboys won just 3 of their last 7 games, however, with wins over Nevada and Boise State on the season, the Cowboys know they have the ability to make a run for the Mountain West Championship. Wyoming has been led by their offense that ranks 48th in both scoring offense and three-pointers made per game. On the season, Wyoming is averaging 80.1 ppg on 44.3% shooting from the field. The Cowboys are averaging 9.2 three-pointers per game on 34.5% shooting from beyond the arc. Offensively, Wyoming has been led by Justin James (19.1 ppg, 6.1 rpg, 3.0 apg, 1.0 spg), Hayden Dalton (18.1 ppg, 8.0 rpg, 2.5 apg), Alan Herndon (11.5 ppg, 5.7 rpg, 2.0 apg, 2.2 bpg), and Louis Adams (9.9 ppg, 2.6 rpg, 1.3 apg). Defensively, Wyoming is allowing their opponents to average 79.1 ppg on 44.2% shooting from the field. The Cowboys have a rebound margin of -4.1 and a turnover margin of 1.1.

Wyoming won both matchups against San Jose State this season as they defeated the Spartans by a 90-86 (OT) margin on the road in late January and defeated them by an 89-75 margin at home in mid-February.

Wyoming is a tough team to beat if they have everything clicking on the offense end, however, the Cowboys are a team that has been inconsistent at times and their due to their fast-pace style of play, their defense can give up a lot of points. San Jose State won just 1-game on the road this season, however, as they should have a big advantage on the boards and has been great ATS with all the points they’ve been getting, I think the Spartans do just enough in this one to cover with the points.