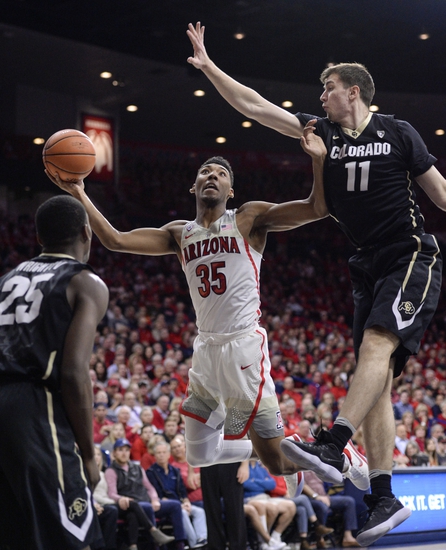 The Colorado Buffaloes and 15th ranked Arizona Wildcats will square off at the T-Mobile Arena this Thursday afternoon in the quarterfinals of the Pac-12 Men’s Tournament.

The 15th ranked Arizona Wildcats finished their regular season with an overall record of 24-7 and earned the top-seed in the Pac-12 Men’s Tournament after finishing conference play with a 14-4 record. Arizona had a rough start to their season going just 3-3 in their first six games and despite the major distractions caused the by the player payment allegations released by the FBI, Arizona has won 5 of their last 6 games. Arizona has been led by their offense this season that ranks 38th in scoring offense, 3rd in FG%, and 42nd in 3P-FG%. On the season, Arizona is averaging 81.1 ppg on 51.0% shooting from the field. The Wildcats are averaging 7.0 three-pointers per game on 38.4% shooting from beyond the arc. Offensively, Arizona has been led by Deandre Ayton (19.9 ppg, 11.4 rpg, 1.6 apg, 1.9 bpg), Allonzo Trier (18.9 ppg, 3.2 rpg, 3.3 apg), Rawle Alkins (13.7 ppg, 4.6 rpg, 2.7 apg, 1.2 spg). Defensively, Arizona is allowing their opponents to average 71.8 ppg on 43.2% shooting from the field. The Wildcats have a rebound margin of 7.1 and a turnover margin of -0.8.

Colorado has had an up and down season however the Buffaloes have found their leader of the future in McKinley Wright IV as he has been outstanding for the Buffaloes this season and really the Colorado offense rolling against the Sun Devils. Arizona is a great offensive team, however, the Wildcats haven’t been that dominant as of late and has struggled ATS towards the end of the season. Colorado played Arizona tough in both matchups this season and although Deandre Ayton will be a handful, I think the Buffaloes will be able to do enough to keep this one within the number.