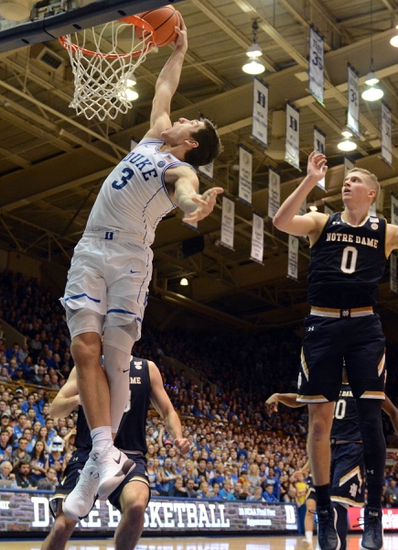 The Notre Dame Fighting Irish and 5th ranked Duke Blue Devils will square off at the Barclays Center this Thursday night in the quarterfinals of the New York Life ACC Men’s Tournament.

Duke had no trouble with the Fighting Irish in their only matchup of the season as the Blue Devils defeated Notre Dame by an 88-66 margin at home in late January.

Notre Dame had an incredible come from behind win against Virginia Tech to keep their NCAA hopes alive, however, it’s been a bit concerning about how the Fighting Irish have looked in their first two games against Pittsburgh and Virginia Tech. Duke has been playing great on both ends of the court as of late and as I just think that between their scoring punch and size advantage down low, I think the Blue Devils have no trouble with the Fighting Irish and cover this spread.

Please Note: The Team/Players stats for Notre Dame are not updated with the results from their game against Virginia Tech on 3/7.