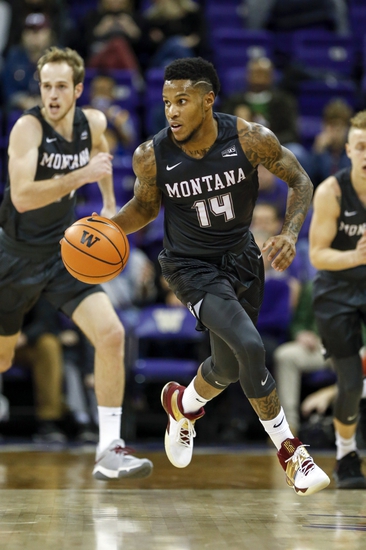 The North Dakota Fighting Hawks and Montana Grizzlies will square off at the Reno Events Center this Thursday afternoon in the quarterfinals of the Big Sky Men’s Championship.

The Montana Grizzlies finished their season with an overall record of 23-7 and earned the top-seed in the Big Sky Men’s Championship after finishing conference play with a 16-2 record. Montana took control of the conference early this season after reeling off 13 straight wins to start conference play and although they couldn’t pick of a signature non-conference win, the Grizzlies did play both Penn State and Washington tough on the road. Montana has been a balanced team this season as the Grizzlies currently rank 82nd in scoring offense and 61st in scoring defense. On the season, Montana is averaging 77.4 ppg on 46.7% shooting from the field. The Grizzlies are averaging 5.5 three-pointers per game on 33.1% shooting from beyond the arc. Offensviely, Montana has been led by Ahmaad Rorie (16.9 ppg, 3.8 rpg, 3.7 apg, 1.3 spg), Michael Oguine (15.3 ppg, 5.5 rpg, 2.0 apg, 1.4 spg), Jamar Akoh (13.6 ppg, 6.8 rpg, 1.1 apg), and Bobby Moorehead (7.6 ppg, 5.1 rpg, 1.3 apg, 1.3 spg). Defensively, Montana is holding their opponents to an average of 67.9 ppg on 42.3% shooting from the field. The Grizzlies have a rebound margin of 4.7 and a turnover margin of 3.1.

Montana won both matchups against North Dakota this season as the Montana won by a 109-79 margin at home in early January while winning a closer 72-67 battle on the road in early February.

North Dakota used their a solid defense effort in the 2nd half to fight back to get their recent victory over Montana State, however, the Fighting Hawks have generally had to rely on their offense outscoring opponents this season as they rank just 335th in scoring defense and 342nd in defensive FG%. Montana has been exceptional on both sides of the  ball this season and between the fact that I just don’t see how North Dakota will slow down the Grizzlies offense and that Montana should have a big advantage on the boards, I’m taking Montana to cover this large spread.