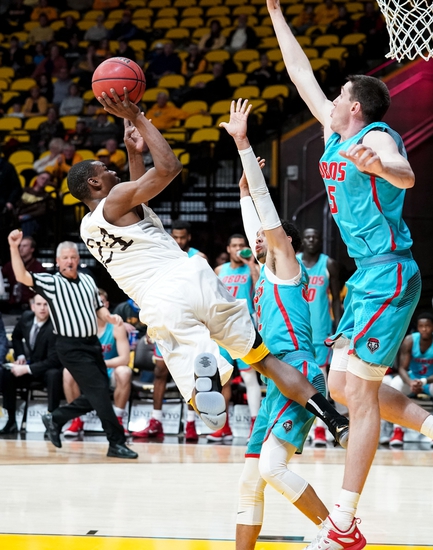 The Wyoming Cowboys and New Mexico Lobos will face off at the Thomas & Mack Center this Thursday evening in the quarterfinals of the Mountain West Men’s Championship.

The New Mexico Lobos finished their season with an overall record of 17-14 and earned the 3-seed in the Mountain West Men’s Championship after finishing conference play with a 12-6 conference record. New Mexico exceeded expectations this season as many people had projected the Lobos to be at or near the bottom of the Mountain West standings by the end of the year, however, the Lobos come into the conference tournament on a 5-game winning streak and went 4-0 against this year against two of the better Mountain West teams in UNLV and Wyoming. New Mexico was led by their offense as the Lobos currently rank 25th in scoring offense 7th in three-pointers made per game, and 45th in assists per game. On the season, New Mexico is averaging 82.3 ppg on 45.3% shooting from the field. The Lobos are averaging 11.1 three-pointers per game on 37.7% shooting from beyond the arc. Offensively, New Mexico has been led by Anthony Mathis (13.3 ppg, 2.0 rpg), Sam Longwood (13.2 ppg, 5.1 rpg, 1.4 apg), Antino Jackson (10.3 ppg, 2.1 rpg, 4.5 apg, 1.4 spg), and Makuach Maluach (9.9 ppg, 2.5 rpg, 1.0 apg). Defensively, New Mexico is allowing their opponents to average 77.9 ppg on 48.5% shooting from the field.

New Mexico defeated Wyoming in both meetings this season as the Lobos won by a 75-66 margin at home in early January and won by a 119-114 margin on the road in late February.

Wyoming has won 4 of their last 6 games and must be happy with their improved defensive effort recently as in their last games, the Cowboys are allowing their opponents to average just 69.5 ppg which is almost 10-points fewer than their season average. New Mexico has looked unstoppable as of late on the offensive end, averaging 98.2 ppg during their 5-game winning streak, however, the Lobos defense has struggled this season as they come into this matchup ranked just 304th in scoring defense and 335th in defensive FG%. This has all the makings of another high scoring game and although Wyoming certainly has the talent to win this game, I just don’t see the Cowboys defense slowing down the Lobos offense in this one and I’m taking New Mexico to cover this small spread.

Please Note: The Team/Players stats for Wyoming are not updated with the results from their game against San Jose State on 3/7.