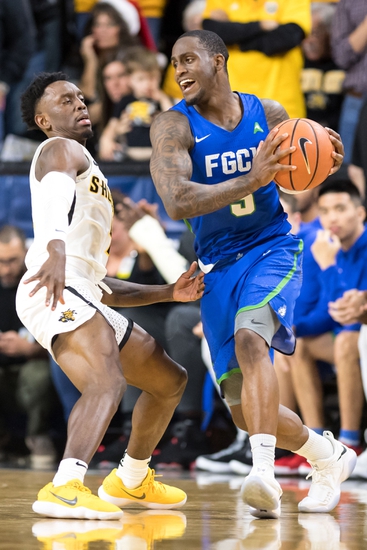 The 2-seed Oklahoma State Cowboys finished their season with an overall record of 19-14 (8-10 Big 12), however, fell just short of getting an at-large bid for the NCAA Tournament despite multiple wins against Kansas along with victories against West Virginia and Texas Tech. Oklahoma State defeated Oklahoma in the 1st round of the Big-12 Tournament, however, couldn’t beat Kansas for a 3rd time this season after falling to the Jayhawks by a 82-68 margin in the quarterfinals. Oklahoma State trailed by just a 43-42 margin at halftime, however, struggled offensively in the 2nd half and couldn’t fight back after falling behind by a 63-50 margin with 8:52 left in regulation. Oklahoma State allowed Kansas to shoot 56.1% from the field while the Cowboys shot just 40.9% from the field and 22.7% (5-22) from beyond the arc. Leading the way for the Cowboys was Jeffrey Carroll who had 17 points, 7 rebounds, and an assist. On the season, Oklahoma State is averaging 76.4 ppg on 43.7% shooting from the field. The Cowboys are averaging 8.2 three-pointers per game on 34.6% shooting from beyond the arc. Offensively, Oklahoma State has been led by Jeff Carroll (15.1 ppg, 6.2 rpg, 1.7 apg), Kendall Smith (12.9 ppg, 2.9 rpg, 2.9 apg, 1.0 spg), Tavarius Shine (9.6 ppg, 3.4 rpg, 1.8 apg, 1.0 spg), and Cameron McGriff (8.7 ppg, 5.5 rpg). Defensively, Oklahoma State is allowing their opponents to average 73.1 ppg on 43.8% shooting from the field. The Cowboys have a rebound margin of 1.9 and a turnover margin of 1.0.

Florida Gulf Coast in no stranger to post-season play and although they came out flat defensively in the A-Sun Championship, the Eagles are still a very good team that had been led by their offense which ranks 30th in scoring offense and 13th in FG%. Oklahoma State must be disappointed not being selected to the NCAA Tournament, however, this team surprised many people this season and has been solid on the offensive end this year as they rank 94th in scoring offense and 116th in three-pointers made per game. Oklahoma State is good team, however, I think this is spot in which it will be tough for the Cowboys to get motivated for this game after not be selected for the NCAA Tournament and as Florida Gulf Coast has an offense that can put up points in a hurry, I'm taking Florida Gulf Coast and the points in this one.