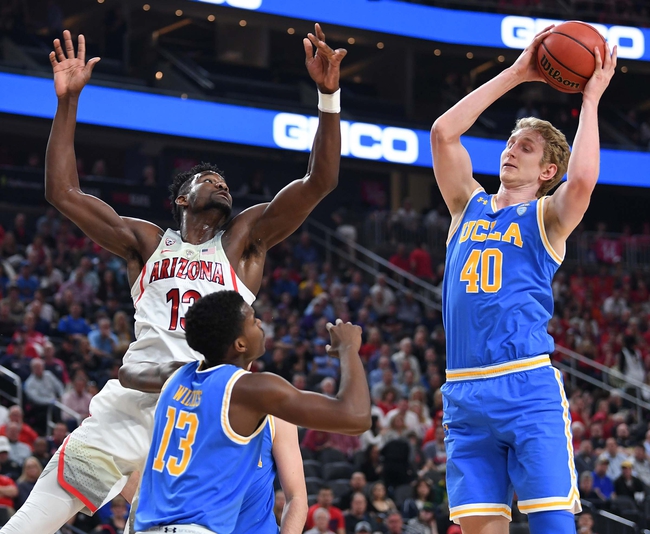 We have some NCAA Tournament First Four action out of the East Region as the St. Bonaventure Bonnies take on the UCLA Bruins in a college basketball matchup on Tuesday.

The St. Bonaventure Bonnies received an at-large bid to the tournament as a #11 seed in one of the first four games by virtue of their 25-7 overall record, including a 14-4 A-10 conference record, giving them the #2 seed, posting a quarterfinal win over Richmond before falling to eventual conference champion Davidson in the semifinals. The Bonnies had some solid wins out of conference, taking down fellow tournament teams like Syracuse and Buffalo on the road, while adding a win over Maryland and a neutral site loss to TCU. Jaylen Adams leads St. Bonaventure with an average of 19.8 points and 5.4 assists per game while LaDarien Griffin is the Bonnies’ top rebounder with 6.5 rebounds per game this season. As a team, St. Bonaventure is scoring 77.9 points per game on 45.6% shooting from the field, 39.8% from behind the 3-point line and 75.4% from the foul line this season.

The UCLA Bruins got their hands on an at-large bid thanks to a 21-11 overall record this season, including an 11-7 mark in Pac-12 conference play, good for a tie for the #3 seed but losing out on a tiebreaker to Utah. UCLA recorded a quarterfinal win over #5 seed Stanford before falling to the eventual conference champion and top seed Arizona in overtime. The Bruins had some stiff competition in the non-conference portion of their schedule, posting wins over Georgia Tech, Wisconsin and Kentucky while falling to fellow tournament teams like Cincinnati, Michigan and Creighton. Aaron Holiday led UCLA with an average of 20.3 points and 5.8 assists per game while Thomas Welsh led the Bruins on the glass, posting a double-double per game with an average of 13 points to go along with his team-leading 10.7 rebounds per game this season. As a team, UCLA is scoring 81.9 points per game on 46.1% shooting from the field, 38.3% from behind the arc and 72.2% from the foul line this season.

This may be the best first four matchup of the four this year as both have extremely solid guard play and can score in bunches. As a matter of fact, whoever wins this game I think has a good shot at taking down Florida in the second round, but as far as this game goes, I think that while the Bonnies have an underrated team, I simply think UCLA is the better group with the better talent, so I'll lay the bucket with UCLA here.