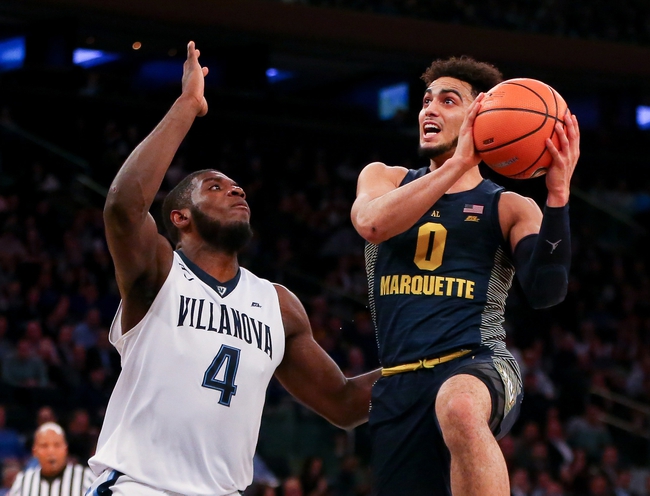 The Harvard Crimson will travel to the BMO Harris Bradley Center to take on the Marquette Golden Eagles this Wednesday night in College Basketball action.

The 7-seed Harvard Crimson finished their regular season with 18-13 overall record however, the pre-season favorite to win the Ivy League conference couldn’t get the automatic bid after falling to the Pennsylvania Quakers, 68-65, in the Ivy League Championship this past Sunday. Harvard fought back from a 55-45 deficit with 8:00 minutes left in regulation to make it game late, however, couldn’t force overtime after multiple game-tying three-point attempts by the Crimson in the closing seconds game up short. Harvard allowed Pennsylvania to shoot 46.2% from the field and 44.4% (8-18) from beyond the arc in the loss. Leading the way for the Crimson was Chris Lewis who had 16 points, 4 rebounds, and a block. On the season, Harvard is averaging 68.5 ppg on 43.1% shooting from the field. The Crimson are averaging 8.1 three-pointers per game on 35.3% shooting from beyond the arc. Offensively, Harvard has been led by Seth Towns (16.0 ppg, 5.7 rpg, 1.8 apg), Bryce Aiken (14.1 ppg, 2.1 rpg, 2.9 apg), Chris Lewis (12.9 ppg, 5.6 rpg, 1.3 apg, 1.5 bpg), and Justin Bassey (7.7 ppg, 5.7 rpg, 2.5 apg, 1.2 spg). Defensively, Harvard is holding their opponents to an average of 66.5 ppg on 42.2% shooting from the field. The Crimson have a rebound margin of 2.5 and a turnover margin of -1.1. Seth Towns is currently questionable for this matchup due to a knee injury that forced him to miss the last 8:20 of regulation in their recent match up against Pennsylvania.

The 2-seed Marquette Golden Eagles finished their regular season with a 19-13 (9-9 Big East) record however, just couldn’t overcome a stretch in which they lost 6 of 8 games in conference play to earn an automatic bid to the NCAA Tournament. Marquette won their 1st round game against DePaul in the Big East Championship however, didn’t put up much of a fight in their quarterfinals matchup against the eventual Big Eat Championship, the Villanova Wildcats, as the Golden Eagles lost by a 94-70 margin. Marquette struggled defensively against the Wildcats as the Golden Eagles allowed the Wildcats to shoot 56.9% from the field and 51.7% (15-29) from beyond the arc in the loss. Leading the way for the Golden Eagles was Markus Howard who had 23 points, 3 rebounds, 3 assists, and a steal. On the season, Marquette is averaging 81.2 ppg on 47.4% shooting from the field. The Golden Eagles are averaging 11.1 three-pointers per game on 41.5% shooting from beyond the arc. Offensively, Marquette has been led by Markus Howard (20.4 ppg, 3.2 rpg, 2.9 apg, 1.0 spg), Andrew Rowsey (20.1 ppg, 3.2 rpg, 4.6 apg, 1.0 spg), Sam Hauser (14.8 ppg, 6.0 rpg, 2.8 apg, 1.0 spg), and Sacar Anim (7.7 ppg, 2.9 rpg, 1.8 apg). Defensively, Marquette is allowing their opponents to average 78.5 ppg on 47.6% shooting from the field. The Golden Eagles have a rebound margin of -1.2 and a turnover margin of 0.5.

Harvard comes into this matchup, winners of 9 of their last 11 games, and has been led by their defense this season that ranks 40th in scoring defense and 70th in defensive FG%. Marquette played well down the stretch, winning 5 of their last 7 games, and has one of the more high powered offenses in the country as the Golden Eagles currently rank 34th in scoring offense, 45th in FG%, and 4th in 3P-FG%. Harvard is a solid team, however, I just don’t think the low-scoring Crimson offense will be able to expose the weak Golden Eagles defense with or without Seth Towns, and as Harvard’s defense will struggle slowing down the trio of Markus Howard, Andrew Rowsey, and Sam Hauser, I’m initially leaning on taking Marquette to cover what I expect to be a sizable spread. Please check back when the line is released.