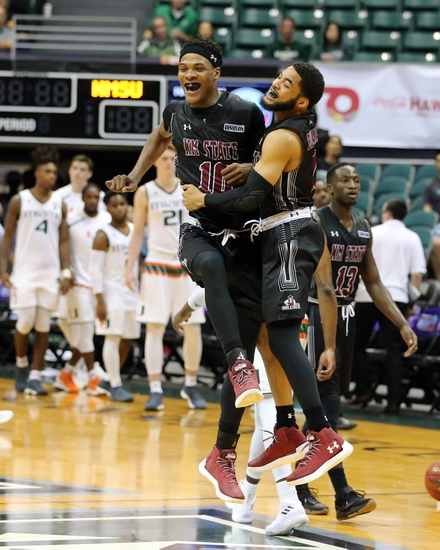 The New Mexico State Aggies and Clemson Tigers will square off at Viejas Arena this Friday night in the 1st round in the NCAA Tournament.

Clemson couldn’t get by the top-ranked Virginia Cavaliers in the semifinals of the ACC Men’s Tournament, as the Tigers lost by a 64-58 margin to Virginia, however, the Tigers still had a successful season, finishing the year with an overall record of 23-9 (11-7 ACC), and earned a 5-seed in the NCAA Tournament as an at-large bid. Clemson gave Virginia some trouble in their recent matchup, however, struggled offensively against the Cavaliers outstanding defense and couldn’t fight all the way back after trailing by a 44-30 margin with 13:03 left in regulation. Clemson shot just 34.7% from the field and 20.0% (5-25) from beyond the arc in the loss. Leading the way for the Tigers was Shelton Mitchell who had 18 points, 2 rebounds, 1 assist, and 2 steals. On the season, Clemson is averaging 73.3 ppg on 45.3% shooting from the field. The Tigers are averaging 8.3 three-pointers per game on 36.6% shooting from beyond the arc. Offensively, Clemson has been led by Marcquise Reed (15.9 ppg, 4.6 rpg, 3.4 apg, 1.7 spg), Gabe DeVoe (13.2 ppg, 4.7 rpg, 2.0 apg, 1.0 spg), Shelton Mitchell (12.0 ppg, 2.9 rpg, 3.5 apg), and Elijah Thomas (10.8 ppg, 7.9 rpg, 1.0 apg, 2.2 bpg). Defensively, Clemson is holding their opponents to an average of 65.8 ppg on 41.0% shooting from the field. The Tigers have a rebound margin of 2.1 and a turnover margin of -0.1. Clemson will be without Donte Grantham who is out for the season due to a knee injury.

New Mexico State has won their last 6 games and has been led by their defense which ranks 10th in scoring margin, 5th in defensive FG%, and 5th in rebound margin. Clemson has struggled a bit over the past month as the Tigers have lost 4 of their last 7 games, however, the Tigers do have one of the better defenses in the country as Clemson ranks 29th in scoring offense and 35th in defensive FG%. This should be a good defensive battle between these two teams and although Clemson has had a great season, I think they are going to have trouble with the Aggies duo of Zach Lofton and Jemerrio Jones and I think New Mexico will at worst cover with the points in this one. Take New Mexico State and the points.