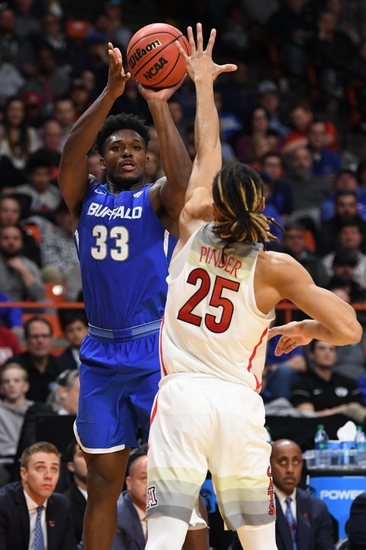 The Buffalo Bulls and Kentucky Wildcats will square off at Taco Ball Arena this Saturday night in the 2nd round of the NCAA Tournament.

The 5-seed Kentucky Wildcats had a tough fight with the Davidson Wildcats who would just not go away, however, Kentucky was able to survive and advance, after defeating Davidson by a 78-73 margin on Thursday night. Davidson fought back from a double-digit halftime deficit to tie the game at 54-all with just under 8 minutes left, however, Kentucky was finally able to pull away after a 9-0 Kentucky run gave Kentucky a 70-59 lead with just :55 seconds left in regulation. Kentucky didn’t make a single three-pointer in the victory, however, shot 51.0% from the field while holding Davidson to just 39.3% shooting from the field and 33.3% (11-33) shooting from beyond the arc. Leading the way for Kentucky was Kevin Knox who had 25 points, 6 rebounds, and an assist. On the season, Kentucky is averaging 76.7 ppg on 47.0% shooting from the field. The Wildcats are averaging 5.4 three-pointers per game on 36.1% shooting from beyond the arc. Offensviely, Kentucky has been led by Kevin Knox (15.9 ppg, 5.4 rpg, 1.4 apg), Shai Gilgeous-Alexander (14.0 ppg, 4.1 rpg, 5.1 apg, 1.7 spg), PJ Washington (10.6 ppg, 5.4 rpg, 1.6 apg), and Hamidou Diallo (9.9 ppg, 3.5 rpg, 1.3 apg). Defensively, Kentucky is allowing their opponents to average 70.3 ppg on 40.6% shooting from the field. The Wildcats have a rebound margin of 4.7 and a turnover margin of -1.1.

Buffalo has an outstanding backcourt which was on full display in their victory against Arizona and has one of the more explosive offenses in the country as the Bulls come into this matchup ranked 7th in scoring offense, 43rd in FG%, and 29th in three-pointers made per game. Kentucky has been playing some if it’s best basketball of the season as of late as the Wildcats have won 8 of their last 9 games and been solid on both sides of the ball as Kentucky currently ranks 88th in scoring offense, 124th in scoring defense, and 23rd in defensive FG%. This will be a tough game for the Bulls, however, between the fact that the Bulls have multiple scoring options and have looked good defensively as of late, I think the Buffalo will be able to do enough to at worst, cover with the points.