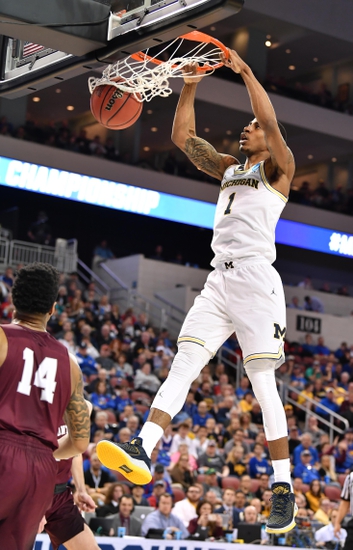 The Houston Cougars and Michigan Wolverines will square off at Inturst Bank Arena this Saturday night in the 2nd round of the NCAA Tournament.

The 6-seed Houston Cougars improved to 27-7 after a dramatic, 67-65, victory over the 11-seed San Diego State Aztecs this past Thursday night. Houston allowed San Diego State to make it game late after holding the lead for the majority of the 2nd half, however, was able to get late-game heroics from their leader, Rob Gray, who sealed the victory for the Cougars after making a tough game-winning lay-up in the closing seconds of regulation. Houston held San Diego State to just 37.0% shooting from the field and 25.0% (4-16) from beyond the arc in the victory. Leading the way for the Cougars was Rob Gray who had a career high 39 points to go along with 8 rebounds and a steal. On the season, Houston is averaging 77.1 ppg on 46.3% shooting from the field. The Cougars are averaging 8.5 three-pointers per game on 38.7% shooting from beyond the arc. Offensively, Houston has been led by Rob Gray (19.2 ppg, 3.5 rpg, 4.4 apg, 1.2 spg), Corey Davis Jr. (13.4 ppg, 3.1 rpg, 2.5 apg), Devin Davis (10.7 ppg, 6.2 rpg, 1.3 apg), and Armoni Brooks (9.5 ppg, 3.7 rpg). Defensively, Houston is holding their opponents to an average of 64.9 ppg on 39.6% shooting from the field. The Cougars have a rebound margin of 6.6 and a turnover margin of 1.2.

The Houston Cougars have shown all season that they can compete with anyone in College Basketball as the Cougars have been solid on both ends of the court and come into this game ranked 81st in scoring offense, 20th in scoring defense, and 8th in defensive FG%. Michigan didn’t look as sharp as they did in the Big-10 Tournament, however, the Wolverines were able to pull out the victory largely due to their defense that comes into this matchup ranked 8th in scoring defense. Houston has had a great season, however, I think the Wolverines will be able come up with a good defensive game plan to at worst, slow down Rob Gray, I'm rolling with Michigan to cover this small spread.