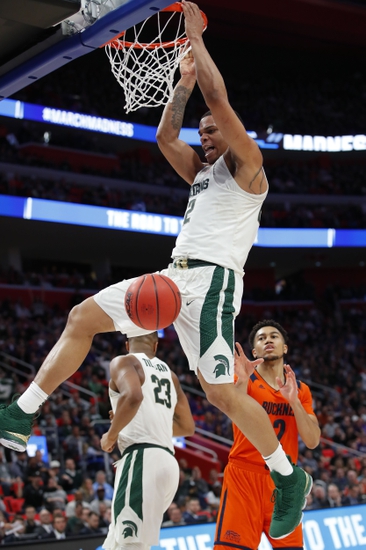 The Syracuse Orange and Michigan State Spartans will square off at Little Caesars Arena this Sunday afternoon in the 2nd round of the NCAA Tournament.

Syracuse has won 4 of their last 5 games and has been led by their defense this season that ranks 12th in scoring defense, 8th in defensive FG%, 48th in rebound margin, and T-8th in blocks per game. Michigan State is one most well-rounded teams in the NCAA Tournament as the Spartans rank 36th in scoring offense, 23rd in scoring defense, 1st in defensive FG%, and 1st in rebound margin. Syracuse plays at the slowest pace in all of College Basketball and will try to do so against to keep this a low-scoring game, however, if the Spartans take care of the basketball, I think they are just too good on both ends of the court for the Orange and that they pull away to win this one by about 10-points. Take Michigan State to cover.