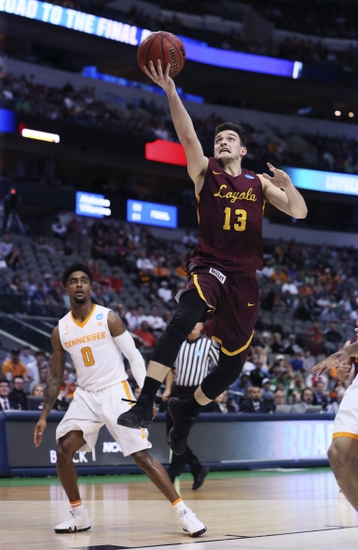 The Loyola-Chicago Ramblers and Nevada Wolf Pack will square off at Phillips Arena this Thursday in the Sweet 16 of the NCAA Tournament.

The 11-seed Loyola-Chicago Ramblers (30-5) continued their NCAA run into the Sweet 16 after the Ramblers upset the 3-seed Tennessee Volunteers, 63-62, this past Saturday night. Loyola-Chicago allowed Tennessee to fight back to take the lead in the closing seconds of the game after holding a 58-48 lead with just over four minutes left in regulation, however, the Ramblers were able to secure the victory after Clayton Custer made a jumper that put the Ramblers in the lead for good with just :05 seconds left in regulation. Loyola-Chicago shot 50.0% from the field and 40.0% (8-20) from beyond the arc in the victory. Leading the way for the Ramblers was Aundre Jackson who had 16 points, 4 rebounds, 1 assist, and a steal in just 22 minutes from off the bench. On the season, Loyola-Chicago is averaging 71.9 ppg on 50.6% shooting from the field. The Ramblers are averaging 7.5 three-pointers per game on 39.8% shooting from beyond the arc. Offensively, Loyola-Chicago has been led by Clayton Custer (13.3 ppg, 2.2 rpg, 4.2 apg, 1.5 spg), Donte Ingram (11.5 ppg, 6.4 rpg, 1.6 apg, 1.0 spg), Aundre Jackson (11.1 ppg, 3.3 rpg, 1.0 apg), and Marques Townes (11.0 ppg, 3.9 rpg, 2.4 apg, 1.0 spg). Defensively, Loyola-Chicago is holding their opponents to an average of 62.2 ppg on 41.6% shooting from the field. The Ramblers have a rebound margin of 1.5 and a turnover margin of 0.9.

Loyola-Chicago is sure making the most of their trip NCAA Tournament after dramatic wins over Miami and Tennessee and is one of the more well-balanced teams in the country as the Ramblers come into this matchup ranked 3rd in FG%, 5th in scoring defense, and 51st in scoring defense. Nevada has had two incredible comebacks against Texas and Cincinnati to advance to the Sweet 16 and has been led this season by their offense that ranks 16th in scoring offense, 55th in FG%, and 21st in 3P-FG%. Both teams have put together impressive runs so far in the NCAA Tournament, however, the Ramblers have the ability to win it on both ends of the court with a solid defense and efficient offense, I think the Ramblers run continues and they win this one outright.