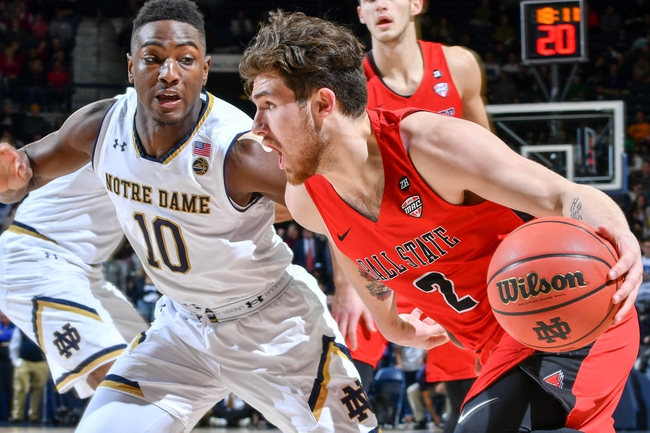 The Indiana State Sycamores will travel to Worthen Arena to take on the Ball State Cardinals this upcoming Tuesday night in College Basketball action.

The Indiana State Sycamores will be looking to bounce back this season after finishing last season with a disappointing 13-18 overall record while finishing 8-10 in Missouri Valley Conference play. Indiana State earned a 6-seed in the MVC Men’s Tournament and couldn’t get back the quarterfinals after falling to the Illinois St. Redbirds by a 77-70 margin. Indiana State will no longer have Brenton Scott (14.5 ppg, 5.7 rpg, 2.4 apg, 1.7 spg) and Qiydar Davis (10.7 ppg, 4.8 rpg, 1.0 apg, 1.6 spg) however, the good news for the Sycamores is that they return one of the best players in the MVC in Jordan Barnes (17.4 ppg, 3.9 rpg, 3.6 apg, and 1.2 spg. Also returning for Indiana State will be Tyreke Key (8.3 ppg, 4.2 rpg, 1.5 apg, 1.0 spg), Clayton Hughes (3.5 ppg, 1.2 rpg) and Bronson Kessinger (3.0 ppg, 2.2 rpg). Indiana State will also be adding two talented players in Cooper Neese and Christian Williams who should make immediate impacts for the Sycamores once they are eligible at the start of the 2nd semester. Indiana State likes to push the ball and put up a bunch of threes and although they have Jordan Barnes, it could be a struggle for the Sycamores unless some of their other players can set up and take some of the pressure off Barnes.

Ball State struggled down the stretch last season losing their last 3 regular season games before being eliminated from the MAC Men’s Championship by the Kent State Golden Flashes in the quarterfinals, however, the Cardinals still had a decent season as they finished their year with a 19-13 (10-8) overall record which included an upset victory at Norte Dame. Ball State received great news this off season as leading scorer, Tayler Persons (15.0 ppg, 3.3 rpg, 4.3 apg) decided to return for his Senior season. The Cardinals return a bunch of experience along with Persons as Tahjai Teague (12.1 ppg, 7.5 rpg, 1.2 apg, 1.2 spg), Trey Moses (11.3 ppg, 8.2 rpg, 2.1 apg), and Kyle Mallers (9.6 ppg, 4.9 rpg, 1.3 apg) all return. Ball State welcome KJ Walton and Kani Acree in the backcourt who should be able to have a solid impact on the defensive end for the Cardinals and with arguably the best front court in the MAC, the Cardinals should be considered one of the favorites in the MAC this season and a mid-major team that Purdue and Virginia Tech shouldn’t overlook early in the season.

Indiana State might have best player on the court in Jordan Barnes, however, the Sycamores just don’t have a lot elsewhere and I just don’t see how they’ll compete with Moses and Teague download and Persons in the backcourt. I think Indiana State will get better as the season goes on however, as long as Ball State makes it a point to play defense when Indiana State pushes the ball, I think the Cardinals cover this spread and win this one by double-digits.