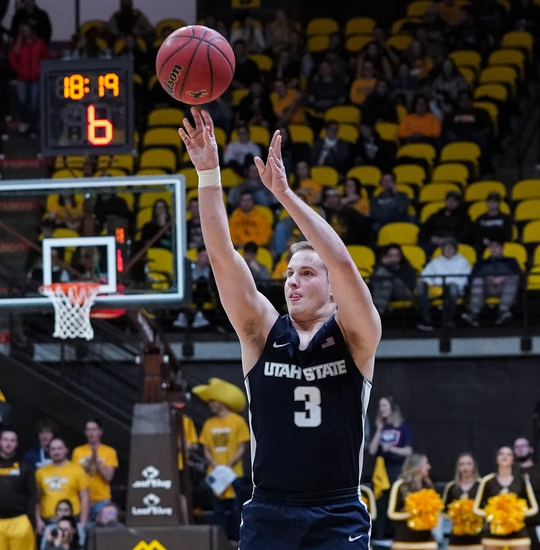 The Utah State Aggies will travel to Brick Breeden Fieldhouse to take on the Montana State Bobcats this Tuesday night in College Basketball action.

The Utah State Aggies finished last season with a 17-17 (8-10 MW) record however, did make some noise in the Mountain West Championship as they knocked off both Colorado State and Boise State before falling to the New Mexico Lobos in by an 83-68 margin in the semifinals. Even with the success towards the end of the season, the Aggies decided to make a change at head coaching position as they replaced Tim Duryea with South Dakota’s Craig Smith. Smith has the Aggies leading scorer in Sam Merrill (16.3 ppg, 3.3 rpg, 3.1 apg, 1.0 spg) back however, Utah State loss two big pieces in Koby McEwen (15.6 ppg, 5.4 rpg, 3.2 apg) who transferred to Marquette and DaAngelo Isby (8.4 ppg, 2.9 rpg, 1.1 apg) who officially transferred in the offseason although he left the team at the end of last season as he was unhappy about the amount of playing team he was getting. Along with Sam Merrill, the Aggies are returning Dwayne Brown Jr. (9.0 ppg, 5.0 rpg, 1.4 apg), Quinn Taylor (6.8 ppg, 4.7 rpg, 1.4 apg), and Diogo Brito (6.0 ppg, 3.5 rpg, 2.0 apg).

The Montana State Bobcats started off the season well as they were 11-6 at one point, including being 4-0 in Big Sky play, however, things fell apart quickly for the Bobcats as they went 2-13 down the stretch to finish the season with an overall record of 13-19 (6-12 Big Sky). Montana State lost their last 7 games of the season, including getting knocked out by the North Dakota Fighting Hawks in the 1st round of the Big Sky Conference Championship. Montana State really struggled defensively last season as they finished the year ranked 321st in scoring defense and 320 in defensive FG%. The good news for the Bobcats is that they have a good chance to bounce back this season as they are returning their top three players in Tyler Hall (17.5 ppg, 3.7 rpg, 2.8 apg), Harald Frey (13.1 ppg, 3.1 rpg, 3.2 apg), and Keljin Blevins (9.7 ppg, 5.8 rpg). Montana State’s frontcourt should get a big boost this season as the Bobcats will bring in the towering Usman Haruna from East Carolina and hope that junior college transfer Ladan Ricketts can provide another scoring option in the backcourt.

Utah State is thrilled to get Craig Smith as their head coach with his proven track record at South Dakota however, the Aggies were hit hard once Koby McEwen decided to transfer and it’s probably going to take a year or two until the Aggies become contenders in the Mountain West. Montana State really struggled at the end of last season, but Tyler Hall is back healthy and is the best player on the court in this matchup. The Bobcats have more experience and will be playing at home and I think they’ll be able to start the season strong with a good showing agianst the Aggies. Take Montana State and the points.