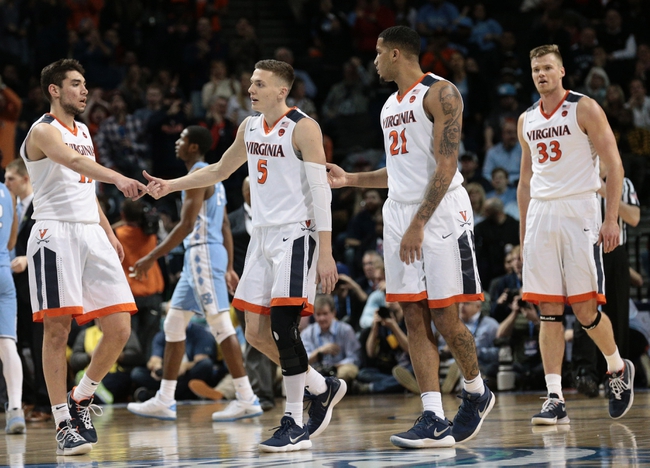 The Towson Tigers will travel to John Paul Jones Arena to take on the 5th ranked Virginia Cavaliers to kick of their 2018-19 seasons this Tuesday night.

The Towson Tigers finished last season with an overall record of 18-14 (8-10 CAA) as although the Tigers started off the season with 10 wins in their first 11 games, the Tigers struggled down the stretch in CAA play as they lost 5 of their last 7 games and was knocked out of the CAA Men’s Tournament after being defeated by the William & Mary Tribe by an 80-66 margin. Towson has been a competitive team with a strong defense over the past few years, however, the Tigers might look like a much different club this season as they lost their top six scorers, including Zane Martin (19.8 ppg, 3.5 rpg, 2.7 apg), Mike Morsell (14.0 ppg, 4.2 rpg, 1.0 spg), and Brian Starr (8.2 ppg, 2.6 rpg, 2.6 apg). Two familiar faces in guard Jordan McNeil (4.7 ppg, 1.6 rpg) and Forward Alex Thomas (2.7 ppg, 3.9 rpg, 0.8 bpg) return for the Tigers and head coach Pat Skerry will hope that Duquesne transfer can make an immediate impact for the Tigers in the frontcourt. Towson will be a very young team and will hope that freshman Jakigh Dottin & Nick Timberlake along with junior college transfers Brian Fobbs and Tobias Howard can help keep the Tigers out of the CAA basement this season.

The 5th ranked Virginia Cavaliers and head coach Tony Bennett finished last season with an impressive 31-3 overall record which included a 17-1 record in ACC play, however, the Cavaliers season ended in shocking fashion as they lost to the UMBC Retrievers by a 74-54 margin in the 1st round of the NCAA, becoming the first every #1 seed lose in the opening round. The good news for the Cavaliers is that they are loaded again with talent and knowing Tony Bennett, should once agianst be one of the best defensive teams in the country as last season they held their opponents to an average of just 54.0 ppg. Virginia did lose Devon Hall (11.7 ppg, 4.2 rpg, 3.1 apg) & Isaiah Wilkins (6.0 ppg, 6.2 rpg) however, brought back a bunch of talent in Kyle Guy (14.1 ppg; 2.6 rpg, 1.5 apg), De’Andre Hunter (9.2 ppg, 3.5 rpg, 1.1 apg), and Ty Jerome (10.6 ppg, 3.1 rpg, 3.9 apg). The Cavaliers frontcourt should be solid this season with Jack Salt (3.4 ppg, 4.1 rpg) returning and will also have Francesco Badocchi available this season after the big man from Italy sat out last season. Guy and Jones will be the main go-to guys in the Virginia backcourt however, they do have some depth returning also, most notably with Marco Anthony who will look to take on a bit of bigger role this season.

Towson is going to take a major step back this season as this is going to be a very young and unproven team and this is probably one of the worse matchups that Tigers could ask for to open their season as they go against a Virginia team that could very well hold them to 40-45 points. Virginia will be happy to get on the court finally so they can put last year finally behind them and as I think they will want to make a statement in this opening game, I have the Cavaliers covering this large home spread. Take Virginia to cover.