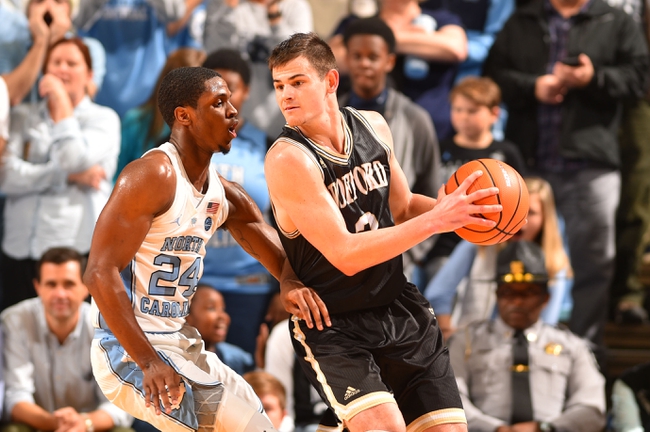 The 8th ranked North Carolina Tar Heels will travel to Jerry Richardson Indoor Stadium to take on the Wofford Terriers to kick off their 2018-19 College Basketball seasons this upcoming Tuesday night.

The 8th ranked North Carolina Tar Heels finished last season with an impressive 26-11 record (11-7 ACC) which earned them a 2-seed in the NCAA Tournament, however, even with solid leadership with Joel Berry II leading the way, the Tar Heels couldn’t make a deep run in the NCAA Tournament as they were defeated by the 7-seed Texas A&M Aggies by an 86-65 margin. North Carolina will no longer have Joel Berry II (17.1 ppg, 3.5 rpg, 3.2 apg) or Theo Pinson (10.3 ppg. 6.5 rpg, 5.1 apg), however, North Carolina and Roy Williams have plenty of talent this season to make another run at a National Championship. North Carolina finished 28th in scoring offense last season and have to be happy that Luke Maye (16.9 ppg; 10.1 rpg, 2.4 apg) is back for his senior year. Also returning for the Tar Heels is Kenny Williams (14.4 ppg; 3.7 rpg, 2.4 apg), Cameron Johnson (12.4 ppg, 4.7 rpg, 2.3 apg), and Garrison Brooks (4.5 ppg, 3.5 rpg). North Carolina will hope that freshman Nassir Little, who showcased his talents at the McDonald’s All-American game last season which earned him the MVP award, can make an immediate impact for the Tar Heels and Roy Williams will hope that either Seventh Woods or Coby White can help provide some production in the backcourt to help replaced Berry II.

Wofford had a successful 2017-18 season as the Terries finished the season with an overall record of 21-12 (11-7 Southern) which included an upset of the 5th ranked North Carolina Tar Heels on the road. The Terriers earned the 5th seed in the Southern Conference Tournament and although they were able to get by the Mercer Bears in the quarterfinals, their upset bid agianst the top-seed UNC Greensboro Spartans came up just short at the fell by a 56-55 margin in the semifinals. Wofford was solid on both ends of the court last season and was outstanding from beyond the arc as they ranked 13th in three-pointers made per game and 5th in 3P-FG%. The Terriers should once again be very dangerous with the three-pointer as they bring back the best player in the Southern Conference in Fletcher Magee who averaged 22.1 ppg, 2.9 rpg, & 1.7 apg. The Terriers should be considered one of the favorites in the Southern Conference as along with Fletcher Magee, the Terriers bring back their other top scorers in Cameron Jackson (12.0 ppg. 5.9 rpg, 1.5 apg, 1.8 spg), Nathan Hoover (11.0 ppg, 2.6 rpg, 1.4 apg), Trevor Stumpe (10.8 ppg, 4.2 rpg, 2.1 apg), and Storm Murphy (6.3 ppg, 2.2 rpg, 4.0 apg).

North Carolina is going to be a solid team, but I’m interested to see how the Tar Heels look as this will be the first time in a long time that they don’t have Joel Berry II controlling the offense at the point-guard position. Wofford has a bunch of talent and experience as along with Fletcher McGee, Cameron Johnson could be a top-5 player in the Southern Conference this season. Wofford shouldn’t be imitated after knocking off the Tar Heels last season and as this is a team that can really shot the three-pointer, I think Wofford will do enough at home to cover with the double-digit points.