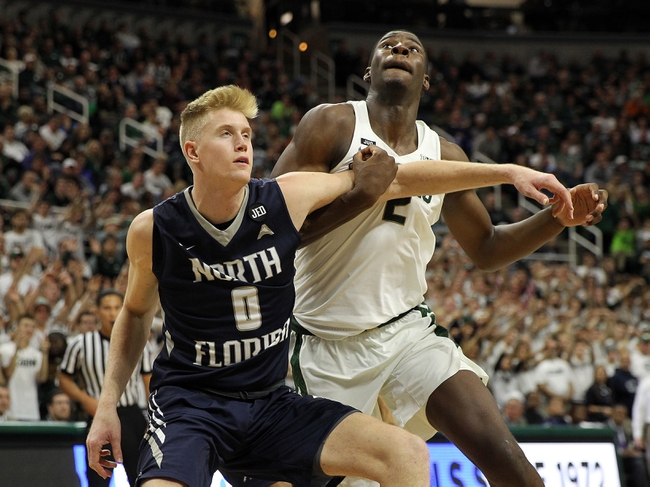 The North Florida Ospreys will travel to University of Dayton Arena to take on the Dayton Flyers this upcoming Wednesday night in College Basketball action.

The North Florida Ospreys finished last season with a disappointing 14-19 (7-7 A-Sun) record however there is a lot of optimism in the program for this upcoming season as the Ospreys will be returning their entire starting five from last season and are projected to be one of the top teams in the Atlantic Sun. North Florida was solid on the offensive end last year as they ranked 37th in scoring offense, however, if the Ospreys are going to live up to expectations this season, they’ll need to improve a defense that ranked 349th in scoring defense and 340th in turnover margin. As we mentioned, points shouldn’t be too hard to come by as the Ospreys return five double scorers in Ivan Gandia-Rosa (13.8 ppg, 2.7 rpg, 6.2 apg), Garrett Sams (12.7 ppg, 4.3 rpg, 1.4 apg), Noah Horchler (11.7 ppg, 8.6 rpg, 1.3 apg), J.T. Escobar (11.5 ppg, 1.9 rpg, 1.1 apg) and J.T. Escobar (11.3 ppg, 4.2 rpg). North Florida should have a deep bench this season as on top of their starting five, they are excited with newcomers Ezekiel Balogun (Citadel transfer) and freshman Cam Copeland & Carter Hendrickson.

The Dayton Flyers and head coach Anthony Grant struggled last season as the Flyers never had a winning streak more than 2 games and finished the season with an overall record of 14-17 (8-10 A-10). Dayton did have a nice win agianst Davidson last season, however, was overmatched by the better teams in the A-10 and was knocked out in the 2nd round of the A-10 Men’s Championship by the VCU Rams by a 77-72 margin. For Dayton to improve, the Flyers will need to improve defensively as last season as they ranked just 203rd in scoring defense and 306th in in defensively FG%. Dayton lost a solid player in Darrell Davis (15.4 ppg, 4.1 rpg, 2.7 apg) however, the Flyers do return a solid core of players led by Josh Cunningham (15.6 ppg, 8.4 rpg, 1.7 apg), Trey Landers (11.3 ppg, 5.6 rpg, 1.8 apg, 1.1 spg), Jordan Davis 98.0 ppg, 1.8 rpg, 1.8 apg), and Jalen Crutcher (9.2 ppg, 3.1 rpg, 4.4 apg). Grant brought in a solid recruiting class led by Junior College transfer Jhery Matos and freshman Dwayne Cohill who knows how to score the basketball.

Playing in Dayton is always a challenge however, North Florida is a solid and experienced team should find success scoring the basketball against a Dayton defense that was less from stellar last season. This game has yet to be lined, but if the Ospreys are getting double-digit points, I’m initially leaning on taking North Florida in this one.