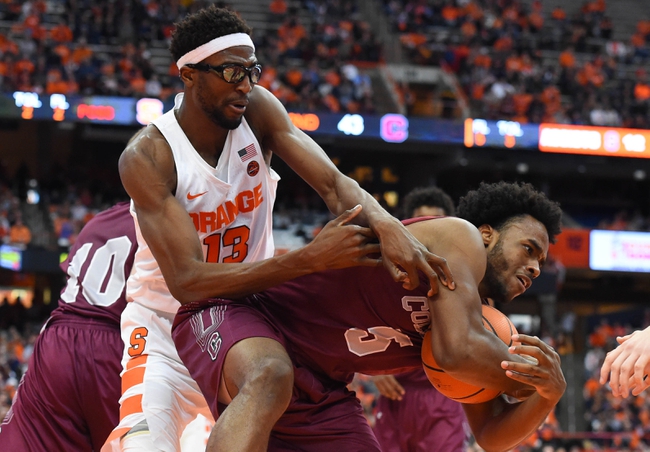 The Monmouth Hawks will travel to Cotterell Court to take on the Colgate Raiders this Friday night in College Basketball action.

The Monmouth Hawks will look to bounce back after they fell to the Lehigh Mountain Hawks by an 85-61 margin in their season opener this past Tuesday. Monmouth trailed by just a 36-30 margin at halftime however, had no answers on either end of the court in the 2nd half and allowed Lehigh to pull away for the convincing victory. Monmouth shot just 33.9% from the field and really struggled from beyond the arc as the Hawks were just 4-21 (19.0%) from beyond the arc. Monmouth was dominated on the boards as they were outrebounded by Lehigh by a 47-28 margin. Monmouth forced Lehigh into committing 18 turnovers however, also had a hard time protecting the basketball as they committed 16 turnovers. Leading the way for the Hawks was Deion Hammond who had 21 points, 1 rebound, and a block. Mustapha Traope had a decent overall game as he had 5 points, 5 rebounds, 1 assist, 1 block, and a steal while George Papas chipped in 6 points, 3 rebounds, and 2 assists in 18 minutes from off the bench.

The Colgate Raiders couldn’t start their season on a winning note as the Raiders lost a hard fought, 81-78 (OT) battle against the NJIT Highlanders this past Tuesday in their season opener. Colgate held the Highlanders scoreless over the final 4:39 of regulation to erase a 7-point deficit and force OT, however, the Highlanders took control in overtime after a 4-point play by Diandre Wilson and Colgate couldn’t force a 2nd OT after Francisco Amiel’s game tying three-point attempt came up short. Colgate shot 47.2% from the field however, struggled defensively as they allowed NJIT to shoot 47.3% from the field and 52.4% (11-21) from beyond the arc. Colgate did a nice job on the glass as they outrebounded NJIT by a 38-27 margin however, forced the Highlanders into committing just 8 turnovers. Leading the way for the Raiders was Rapolas Ivanauskas who had a double-double with 16 points, 13 rebounds, 2 blocks, and an assist. Will Rayman had a solid overall game as he had 17 points, 6 rebounds, & 4 assists while Jordan Burns chipped in with 13 points.

It was a tough season for the Monmouth Hawks last season as they finished the season with just an 11-20 (7-11 MAAC) record and although it will be difficult for the Hawks to repeat the success they saw just a few years ago, Monmouth should be a better team year as they do return Deion Hammond (12.0 ppg, 2.4 rpg), Ray Salnave (9.8 ppg, 3.5 rpg, 1.6 apg), and Diago Quinn (6.8 ppg, 4.3 rpg). Colgate lost a bunch of talent that that reached the Patriot League finals last season however, it’s going to be hard for the Raiders to repeat that level of success after losing Sean O’ Brien. Colgate is a team that loves to put up three pointers however, will need to do a better job on the defensive end if they want to compete for a Patriot League Championship.

Monmouth doesn't look like they improved on the defensive end over the offseason and as the Radiers should be able to get a ton of open looks behind the arc, I think the Raiders do enouhg to cover this small spread.