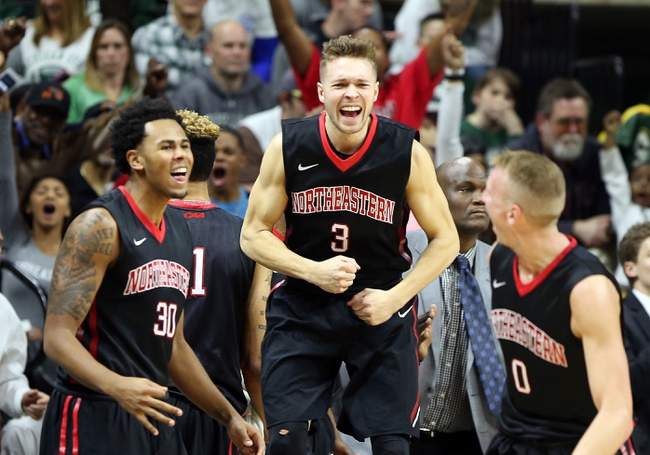 The Northeastern Huskies will travel to Lavietes Pavilion to take on the Harvard Crimson this Friday night in College Basketball action.

The Northeastern Huskies will look to bounce back after the falling to the Boston University Terriers by a 77-74 margin in their season opener this past Tuesday.  Northeastern led by a 70-63 margin with just 2:28 left in regulation however, had no answers defensively the rest of the way and couldn’t regain the lead after a Tyler Scanlon jumper with :26 seconds left in regulation gave the Terriers the lead for good. Northeastern struggled from beyond the arc as they shot just 24.0% (6-25) and allowed Boston University to shoot 49.2% from the field and 37.5% from three-point range. Northeastern was outrebounded by a 38-30 margin and committed 10 turnovers in the loss. Leading the way for the Huskies was Vasa Pusica who had 31 points, 2 rebounds, and 6 assists. Also contributing for the Huskies was Anthony Green (10 points, 8 rebounds, 2 steals) and Tomas Murphy (12 points, 4 rebounds, 1 steal).

Harvard had more of a battle than they expected agianst MIT, however, were able to open up their season with a victory as they defeated MIT by a 78-66 margin this past Tuesday. Harvard went into halftime leading by just a 40-39 margin, however, opened up the 2nd half on an 8-0 run and pulled away after a 10-0 run gave Harvard a 75-60 lead with about 2 minutes left to play. Harvard shot 54.5% from the field while holding MIT to just 38.3 shooting from the field and 31.3% (5-16) from beyond the arc. Harvard was outrebounded by MIT by a 34-33 margin and allowed MIT to hang around longer than expected as they committed 18 turnovers in the victory. Leading the way for the Crimson was Chris Lewis who had 20 points, 1 rebound, 1 assist, 1 steal, and 3 blocks. Noah Kirkwood was solid in 21 minutes as the freshman chipped in 13 points and 3 rebounds while Justin Bassey also contributed 9 points, 7 rebounds, 2 assists, and a steal.

Northeastern will take the short trip across the Charles River in Boston to take on Harvard and what should be an exciting matchup against two teams that are projected to be at or near the top of their respective conferences by the end of the season. Northeastern has a solid starting five, led by Vasa Pusica, that should be solid on both ends of the court, however, depth could be an issue for the Huskies as outside of Thomas Murphy, the Huskies only got 10 minutes total action from the rest of their bench. Harvard comes in with a bunch of experience as they basically are running out the same team that finished 18-14 last season and with at least three of the best players in the IVY league in Seth Towers, Chris Lewis, and Bryce Aiken it will be a disappointing season for the Crimson if they don’t win the Ivy league and go to the NCAA Tournament. This is going to be a great matchup against two talented teams however, as I think this one is going to go down wire, I think Vasa Pusica and the Huskies will do enough to at worse, cover with the poitns.