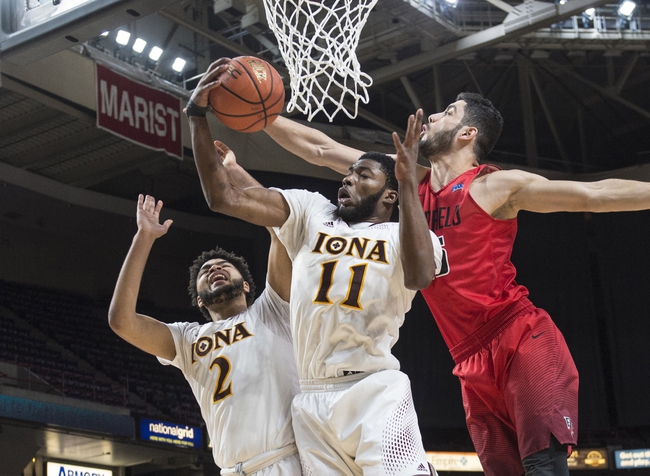 The Albany Great Danes will travel to the Hynes Athletics Center to take on the Iona Gaels this Friday night in College Basketball action.

The Albany Great Danes finished  last season with their 4th consecutive season of 20+ wins, however, it was a somewhat disappointing season for the Great Danes as they finished America East play with just a 10-6 record and was bounced in the quarterfinals of the conference championship after being defeated by the Stony Brook Seawolves by a 69-60 margin. It’s going to be hard for Albany to repeat the level of success we’ve seen from them recently as the Great Danes basically will be putting an entirely new team on the floor. Albany no longer has their top-4 scorers from last year team in Joe Cremo (17.8 ppg, 4.1 rpg, 3.8 apg), Travis Charles (14.6 ppg, 5.6 rpg), David Nichols (14.6 ppg, 4.3 rpg, 3.5 apg), and Greig Stire (8.3 ppg, 8.3 rpg, 1.2 apg).  The only familiar faces returning will be Devonte Campbell (6.7 ppg, 3.7 rpg, 1.7) and Ahmad Clark (3.7 ppg, 1.1 rpg). If Albany has any hope on being competitive this season, they will need to hope that newcomers Rayshawn Miller, Cam Healy, Adam Lukla, and Brett Hank all can make an immediate impact for the Great Danes.

The Iona Gaels look to continue their dominance of the MAAC Conference as the Gaels won their 3rd straight MAAC Championship after finishing last season with a 20-14 (11-7 MAAC) record. Iona lost a couple of key players from last year’s squad in Deyshonee Much (10.5 ppg, 3.8 rpg, 2.3 apg, 1.2 spg) & Schadrac Casimir (10.4 ppg, 1.9 rpg, 2.0 apg) however, the Gaels are going to be once again tough to beat as they return their top three scorers in Rickey McGill (13.4 ppg, 4.0 rpg, 5.6 apg, 1.5 spg), E.J. Crawford (12.5 ppg, 3.4 rpg, 1.1 apg), and Roland Griffin (11.2 ppg, 5.2 rpg, 1.4 apg). Iona did a good job in getting some depth on the bench this season as they have a bunch of junior college transfers, led by Tajuan Agee and have two transfers in Isaiah Still (Robert Morris) and Asante Gist (Eastern Kentucky) who should be able to make immediate impacts. Iona is a team that likes to push the pace and I expect to see much of the same from the Gaels this season.

Albany has been a solid team however, it’s going to be hard for the Great Danes to continue their success as they are an extremely inexperienced team with a bunch of unknowns. The Gaels are going to give up points as they always do but they Ricky McGill is going to be one of the players in the MACC this season and I think the additions of Isaiah Still and Asante Gist have made Iona one agianst one of the favorites in the MAAC. Albany is a well coached team however, with so much unknown with the Great Danes to start the season, I don't see how i can go against a proven Iona team. Take Iona to cover the spread.