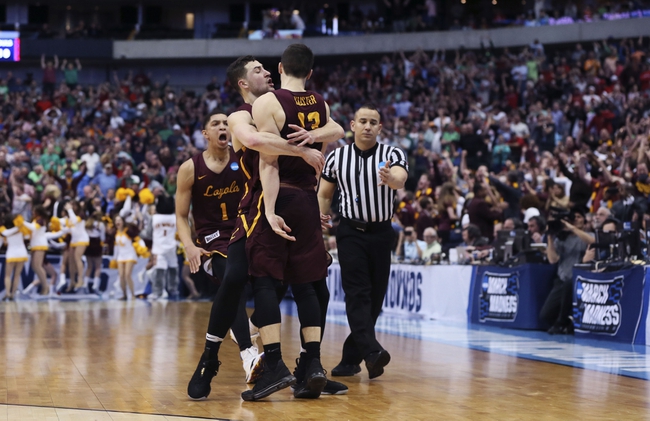 The Furman Paladins will travel to the Josepha J. Gentile Center to take on the Loyola-Chicago Ramblers this Friday night in College Basketball action.

The Furman Paladins had little trouble opening their season with a victory as they defeated the NCCAA Bob Jones University Bruins, 102-48, this past Tuesday. Furman had their way on both ends of the court throughout the game and had no trouble securing the victory after they went into halftime with a 51-29 lead. Furman shot 55.9% from the field while holding the Bruins to 42.6% shooting from the field and 27.3% shooting from beyond the arc. Furman outrebound Bob Jones by a 37-25 margin and dominated in the turnover battle by a 21-3 margin. One area in which the Paladins will hope they can improve immediately is at the FT-line as Furman shot just 61.9% (13-21) from the charity stripe. Leading the way for the Paladins was Matt Rafferty who had 24 points, 8 rebounds, 5 assists, 1 block, and a steal. Also contributing for Furman was Jordan Lyons (23 points, 3 assists) and Clay Mounce (12 points, 7 rebounds, 2 assists, 1 block).

The Loyola-Chicago Ramblers look to open up their season with a 2-0 record after they had little trouble in their season opener, as the Ramblers defeated the UMKC Kangaroos by a 76-45 margin on Tuesday.  Loyola-Chicago dominated the Kangaroos on both sides of the ball and easily cruised to victory after they went into halftime with a 40-18 lead. Loyola-Chicago shot an impressive 54.7% from the field while they held UMKC to 29.8% shooting from the field and 30.0% shooting from beyond the arc. Loyola-Chicago struggled from the FT-Line as they hit just 10 of 21 FT’s (47.6%) however, they dominated the Kangaroos on the boards, outrebounding UMKC by a 48-34 margin. Leading the way for the Ramblers was Marques Townes who had 13 points, 3 rebounds, & 4 assists in 23 minutes of action. Big man Cameron Krutwig chipped in 10 points & 6 rebounds and the Ramblers got an outstanding effort by freshman Cooper Kaifes who finished with 19 points off the bench on 5-7 shooting from beyond the arc.

Furman is a team that could score the basketball last season however, the Paladins were hit hard in the off season and they lost their top-3 scorers in Devin Sibley, Daniel Fowler, and John Davis III. Loyola-Chicago won’t sneak up on anyone this season as although they lost a few key players, including Andre Jackson & Donte Ingram, they have brought back a ton of talent in Clayton Custer, Marques Townes, and Cameron Krutwig. Loyola-Chicago is a very balanced team that is tough to play at home and as I think the Paladins are going to have a hard time slowing down the Ramblers efficient offense, I’m taking Loyola-Chicago to cover this home spread.