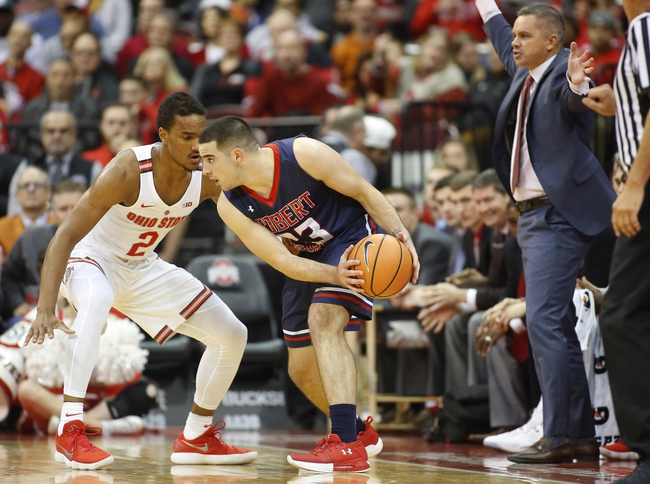 The Robert Morris Colonials will travel JQH Arena to take on the Missouri State Bears this Friday night in College Basketball action.

The Robert Morris Colonials will be looking to rebound after starting their season with an 83-62 loss against the USC Trojans this past Tuesday. Robert Morris did a solid job hanging around with the Trojans early in this one as they trailed by just a 37-35 margin at halftime, however, the Colonials had no answers on either end of the court and allowed USC to pull away for the easy victory. Robert Morris struggled offensively as the shot just 34.3% from the field and 16.7% from beyond the arc. The Colonials allowed USC to shoot 52.6% from the field and had no answers for the three-point ball as USC went 7 for 13 from beyond the arc. Robert Morris was outrebounded by USC by a 42-31 margin however, did win the turnover battle by a 15-11 margin. Leading the way for the Colonials was Josh Williams who had 20 points, 3 rebounds & 3 assists. Matty McConnell had a solid game with 10 rebounds, 7 assists & 2 steals while  Koby Thomas had a double-double with 16 points & 10 rebounds in 30 minutes from off the bench.

The Missouri State Bears look to start their season off with a 2-0 record after they easily defeated the Oral Roberts Golden Eagles, 84-50, this past Tuesday in their season opener. Missouri State used a 20-5 run to take a 41-24 lead late in the 1st half and easily cruised to victory as they held a double-digit lead throughout the 2nd half. Missouri State shot 55.6% from the field however, they were more impressive on the defensive end as they held Oral Roberts to just 29.3% shooting from the field and 17.9% shooting from beyond the arc. Missouri State outrebounded Oral Roberts by a 39-34 margin and forced the Golden Eagles into committing 21 turnovers in the victory. Leading the way for the Bears was Jarred Dixon who had 26 points, 1 rebound, 2 assists, and 2 steals. Keandre Cook had a solid all-around game as he finished with 12 points, 7 rebounds, 2 assists, 1 block & 1 steal while Ryan Kreklow added 13 points, 4 rebounds, 3 assist, & 2 steals in 24 minutes from off the bench.

Robert Morris struggled down the stretch last season however, they still finished with a respectable 16-17 (9-9 Northeast) and made it to the semifinals of the conference tournament before losing to the Wagner Seahawks. Robert Morris lost a few solid players in Dachon Burke & Leondre Washington who decided transfer, however, return a solid group of players including Koby Thomas & Matty McConnell. Robert Morris will have success this season if they get can enough offense to go with their solid defense that ranked 132nd in scoring defense & 24th in steals per game last season. Missouri State is currently rebuilding as it will be challenge for 1st year head coach, Dana Ford, to have a winning season for the Bears. The Bears will need to hope that some of their newcomers can contribue offensively, especially as the Bears lost their only double-digit scorers in Alize Johnson (15.0 ppg; 11.6 rpg) & Jarred Rhodes (10.8 ppg, 4.1 rpg, 1.4 apg).

This game has yet to be lined, however, as I think the Robert Morris defense will give the Bears unproven offense trouble, I’m leaning towards taking the Colonials and the double-digit points. Good Luck!