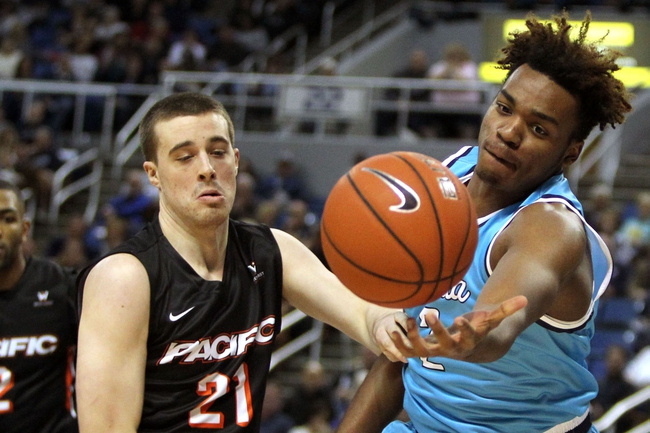 The Pacific Tigers will travel to the Lawlor Events Center to take on the 7th ranked Nevada Wolf Pack this Friday night in College Basketball action.

The Pacific Tigers opened up their season on a winning note this last Tuesday as they were able to do on the road and defeat the SIU-Edwardsville Cougars, 74-65. Pacific jumped all over the Cougars in this one as they started off the game on a 16-0 run and built a 40-21 lead by halftime. Pacific struggled with turnovers in the 2nd half which allowed the Cougars to make a comeback attempt, however, the Tigers did enough down the stretch to hold on for the victory. Pacific shot 49.0% from the field while holding the Cougars to just 39.3% shooting from the field and 25.8% shooting from beyond the arc. Pacific dominated on the boards, outrebounding SIU-Edwardsville by a 43-25 margin, however, did commit 21 turnovers in the victory. Pacific was led by Lafayette Dorsey who had 18 points, 2 rebounds, & 3 assists in 22 minutes from off the bench. Also chipping in was Anthony Townes (15 points, 7 rebounds) and Roberto Gallinat (13 points, 5 rebounds, 1 assist). It was encouraging win for the Tigers as their best player, Jahlil Tripp (5 points, 5 rebounds, 6 assists) was limited to just 19 minutes of action due to foul trouble.

The 7th ranked Nevada Wolf Pack have high expectations coming into this season and didn’t disappoint as they were able to defeat the BYU Cougars, 86-70, in their season opener this past Tuesday. Nevada had a battle on their hands agianst the Cougars as they went into halftime tied at 34-all however, had a strong 2nd half and were able to pull away after a 7-0 run gave Nevada a 72-61 lead with 4:36 left in regulation. Nevada shot just 37.9% from the field and 28.6% from beyond the arc, however, their defense was solid agianst the Cougars as BYU shot just 37.7% from the field and 19.4% from beyond the arc. Nevada outrebounded BYU by a 48-44 margin and did a nice job protecting the basketball as they committed just 8 turnovers in the victory. Leading the way for the Wolf Pack was Justin Caroline who had a monster double-double with 25 points, 16 rebounds, 2 assists & a steal. Caleb Martin (21 points, 3 rebounds, 2 assists) and Cody Martin (11 assists, 7 rebounds) also contributed for Nevada.

Pacific continues to get better under head coach Damon Stoudamire as they finished last season with a 9-9 record in the WCC and bring back one of the better players in the WCC in Jahlil Tripp. Nevada has huge expectations this season as this team is loaded with talent, led by Jordan Caroline, and the Martin twin and once again should  be putting up huge offensive numbers after finishing last season averaging 82.6 ppg. Nevada is a tough place to play, however, Pacific has some decent offensive players that should be able to put up some points agianst the Wolf Pack and as imagine that Pacific will pack the inside with a zone and challenge a Wolf Pack team that doesn’t have much outside shooting, I think the Tigers do enough to cover with the large amount of points.