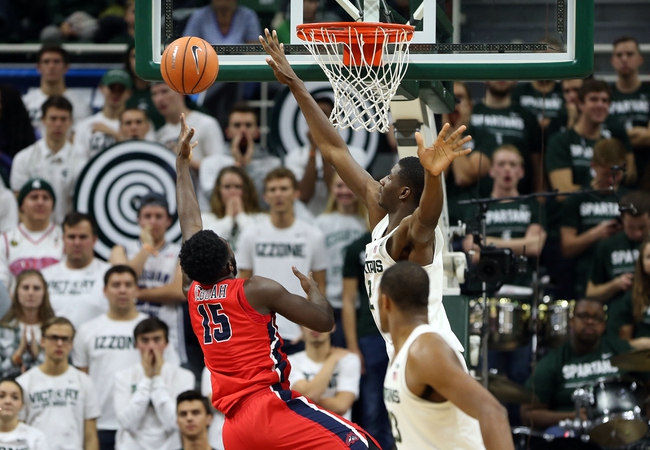 The Stony Brook Seawolves will travel to the Colonial Life Arena to take on the South Carolina Gamecocks this Friday night in College Basketball action.

The Stony Brook Seawolves opened their 2017-18 season with an impressive 77-74 OT victory on the road agianst the George Washington Colonials. Stony Brook came out of the gates flat and found themselves down by a 22-0 margin to start off the game, however, the Seawolves cut the deficit to 10 points by halftime and forced OT on an Akwasi Yeboah layup with just :01 remaining in regulation. In overtime, the Seawolves went on an 8-4 run to take a 71-68 lead and made some clutch FT’s down the stretch to hold on for the victory. Stony Brook won despite shooting just 38.6% from the field and 23.1% from beyond the arc. Stony Brook did outrebound George Washington by a 46-38 margin and forced the Colonials into committing 17 turnovers in the victory. Leading the way for the Seawolves was Elijah Olaniyi who had a double-double with 18 points, 10 rebounds, and 3 assists. Miles Latimer (15 points, 4 rebounds, 2 steals) and Akwasi Yeboah (12 points, 8 rebounds, 1 assist, 1 steal) also had big games in the Seawolves comeback.

The South Carolina Gamecocks struggled at times, however, was able to open their season with a victory after defeating the South Carolina Upstate Spartans by a 65-52 margin on Tuesday night. South Carolina used a 20-0 run early in the game to take a 29-9 lead and pulled away after taking a 53-35 lead with 7:35 left in regulation. South Carolina held the Spartans to just 32.8% shooting from the field however, really struggled on the offensive end as they also shot 32.8% from the field and went 0-18 from beyond the arc. The Gamecocks dominated the glass as they outrebound South Carolina Upstate by a 50-34 margin and won the turnover battle by a 22-19 margin. Although the Gamecocks struggled from beyond the arc, they were decent at the FT-line as they shot 73.0% on 27 of 37 shooting. Leading the way for the Gamecocks was Keyshawn Bryant who had 21 points, 7 rebounds, 1 assist, and a block in 21 minutes. Also contributing for the Gamecocks were big man Chris Silva who had a double-double with 13 points & 11 rebound and Maik Kotsar who had 6 points, 7 rebounds, & 3 steals.

Stony Brook struggled a bit last year however, this is a program that has been successful for the most part over the last decade. Stony Brooks is a big, athletic team that is strong on the offensive end and if they can find some help for Akwasi Yeboah on the offensive end, could end of being a top team in the America East this season. South Carolina made a magical run in the NCAA Tournament just two years ago, however, this is a team was barley .500 last season (17-16) can could be in for another long season as they just don’t have a lot of talent outside of veteran Chris Silva. The Gamecocks are well coached and will also bring a bunch of effort however, outside shooting was a concern coming into this season and it certainly doesn’t look good when you go 0-18 from three-point range in your season opener.

I think that the Seawolves have the size and defense to give South Carolina some trouble, and as the Gamecocks don't have much to rely on the offensive end, I think Stony Brook does enough with the points to cover in this one.