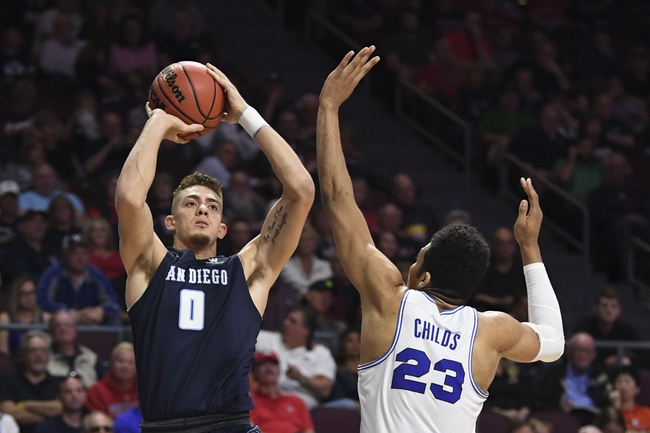 The San Diego Toreros will travel to The Pavilion (UC Davis) to take on the UC Davis Aggies this Friday night in College Basketball action.

The San Diego Toreros got off to a slow start in their season opener, however, used a strong offensive 2nd half to fight back and easily defeat the Weber State Wildcats, 83-66, in their season opener this past Tuesday. San Diego trailed throughout the 1st half and went into halftime down by a 32-25 margin, however, used a 26-9 run to open the 2nd half to take a 51-41 lead and had no trouble from there securing the victory. After the slow start, the Toreros shot the ball great and finished the game shooting 49.2% from the field and 41.2% (7-17) from beyond the arc. San Diego outrebounded Weber State by a 42-31 margin while also winning the turnover battle by a 42-31 margin. Leading the way for the Toreros was Isaiah Pineiro who had a double-double with 25 points, 12 rebounds, 1 assist, and 4 steals. Also contributing for the Toreros were Isaiah Wright (13 points, 6 rebounds, 8 assists, 2 steals) and Olin Carter III (13 points, 3 assists, 1 rebound, 1 steal).

The UC Davis Aggies will look to bounce back after they opened their season this past Tuesday, getting destroyed by the San Francisco Dons by a 76-42 margin. This one was over from the start as UC Davis allowed San Francisco to race out to a 28-6 lead midway through the 1st half and easily pulled away after a 10-0 Dons run early in the 2nd half put the Aggies in a 60-33 hole with 11:20 left in regulation. UC Davis allowed San Francisco to shoot 52.5% from the field while the Aggies shot just 27.5% from the field and 15.8% (3-19) from beyond the arc. UC Davis was outrebounded by San Francisco by a 43-28 margin and the Aggies committed 18 turnovers in the loss. Leading the way for the Aggies was Garrison Goode who had 8 points, 5 rebounds, and 2 blocks. Siler Schneider chipped in with 6 points, 2 rebounds, 3 assists and a steal while Stefan Gonzalez had 8 points & 8 rebounds in 28 minutes from off the bench.

San Diego looks to build off a solid 2017-18 campaign that saw the Toreros finished the year with a 20-14 record while being very competitive in games against WCC heavyweights Gonzaga & Saint Mary’s. San Diego has a very balanced starting fives as they have Isaiah Pineiro down load and a loaded backcourt led by Isaiah Wright & Olin Carter III. San Diego does a nice job defending the three-pointer however, they’ll need to do a better job limiting fouls as teams made a living at the FT line against the Toreros last season. UC Davis no longer has Chima Moneke, however, with TJ Shorts returning and a defense that generally is always their strength, I would expect that their season opening dud agianst San Francisco will be more of an outliner performance as the season goes on. UC Davis also returned Siler Schneider who averaged 13.9 ppg last season and expect big things from St. Mary’s transfer, Stefan Gonzalez.

I expect a better performance from UC Davis in this one however, San Diego is an underrated team that has a bunch of talent. UC Davis needs to rely on their defense to win games however, I think that is going to be a challenge for the Aggies against the Toreros trio of Pineiro, Wright, and Carter III and I think San Diego does enough on the road to cover this small spread.