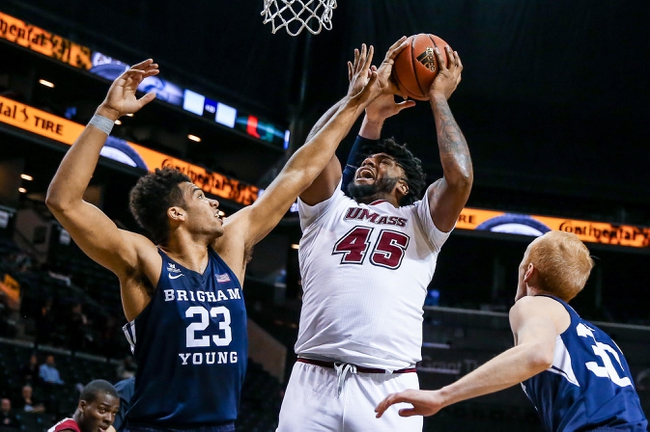 The New Hampshire Wildcats will travel to the William D. Mullins Memorial Center to take on the UMass Minutemen this Friday night in College Basketball action.

The New Hampshire Wildcats opened up their 2018-19 season with a dominating 108-54 victory over the D-III Rivier Raiders this past Tuesday. New Hampshire had their way offensively agianst the undersized Raiders and had no trouble securing the victory after they went into halftime with a 52-18 lead. New Hampshire shot 60.3% from the field and 44.8% from beyond the arc while holding Rivier to just 31.7% shooting. The Wildcats did an outstanding job on the glass as they outrebounded the Raiders by a 53-22 margin and forced Rivier into committing 16 turnovers in the victory. New Hampshire will hope to improve from the FT-Line as the season goes on as they shot just 56.5% (13-23) in their season opener. Leading the way for the Wildcats was Luke Rosinski who had a double-double with 11 points & 10 rebounds. Jayden Martinez (15 points, 5 rebounds, 2 assists, 1 steal) and Nick Guadarrama (14 points, 6 rebounds, 1 assist, 1 block, 2 steals) also had solid games from off the bench for the Wildcats.

UMass had more of a battle then they expected in their season opener agianst the UMass Lowell River Hawks, however, the Minutemen were able to open up their season with a victory after an 83-75 win this past Tuesday. UMass led by just a 42-39 margin at halftime however, used a 9-0 run to take a 73-57 lead with 6:05 remaining and held of a late River Hawks run to secure the win. UMass shot 50.8% from the field however, struggled a bit from the outside as they shot just 30.0% (6-20) from beyond the arc. UMass won the battle on the glass as they outrebounded UMass Lowell by a 42-36 margin however, struggled protecting the ball as they committed 15 turnovers. UMass did a nice job getting to the FT-Line however, they didn’t take advantage of as they shot just 55.6% (15-27) from the charity stripe. Leading the way for the Minutemen was Carl Pierre who had 21 points, 2 rebounds, & 2 assists in 34 minutes of action. Luwane Pipkins (19 points, 3 rebounds, 3 assists) and Jonathan Laurent (10 points, 4 rebounds, 5 assists) also had major impacts in the Minutemen victory.

New Hampshire has been a middle of the road America East team over the last few seasons, however, the Wildcats are expected to struggle this season as they lost a huge amount of talent in Tanner Leisnner, Iba Camara, and Jacoby Armstrong. New Hampshire doesn’t have one returning player that averaged over 10.0 ppg last season and will need to hope that the incoming freshman and transfers can have a major impact immediately. UMass has a difficult first season under Matty McCall, however, this year should be a different story as Minutemen have Luwane Pipkins & Rashaan Holloway back to go along with transfers a bunch of talented transfers in Curtis Cobb, Jonathan Laurent, Keon Clergeot, and Kieran Hayward who are all eligible to play this season.

I expected a better performance from UMass in their season opener, however, it probably will take a team with so many new players a few games to get used to one another. That being said, the talent level between these two teams is vast and as I just don't see how the Wildcats will be hang around in this one, I think UMass pulls away in the 2nd half and covers this spread.