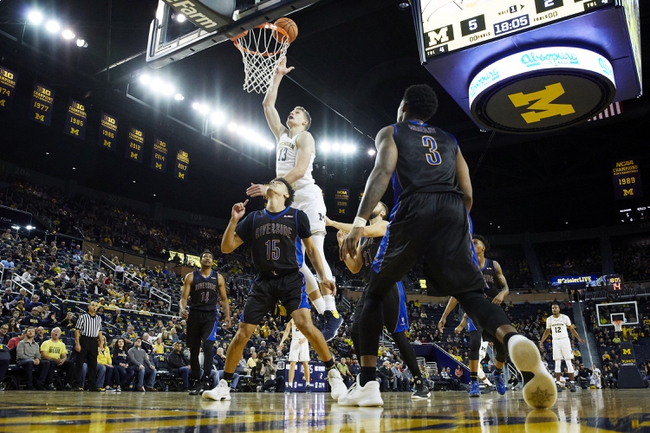 The UC Riverside Highlanders will travel to Viking Pavilion to take on the Portland State Vikings this Saturday night in College Basketball action.

The UC Riverside Highlanders will look to bounce back after falling to the Oregon State Beavers, 72-59, in their season opener this past Tuesday night. UC Riverside gave Oregon State all they could handle in the 1st half and entered halftime trailing by just a 28-27 margin, however, struggled defensively in the 2nd half and couldn’t fight back a 14-0 Beavers run gave Oregon State a double-digit lead midway though the 2nd half. UC Riverside shot just 38.6% from the field while they allowed Oregon State to shoot 50.8% from the field and 40.0% (6-15) from beyond the arc. UC Riverside was outrebounded by a 30-28 margin and lost the turnover battle by a 11-7 margin. Leading the way for the Highlanders was Dikymbe Martin who went 7-11 from the field for 20 poitns, 4 rebounds, and 3 assists. Jordan Gilliam had a solid overall game with 6 points, 5 assists, 3 rebounds and 2 steals while Dragan Elkaz poured in 12 points in 24 minutes from off the bench.

The Portland State Vikings will look to pick up their first win of the season after dropping their season opener to the 14th ranked Oregon Ducks by an 84-57 margin this past Tuesday. Portland State was overmatched on both ends of the court and couldn’t fight back after Oregon went into halftime with a 45-29 lead. Portland State allowed Oregon to shoot 54.0% from the field while the Vikings shot just 28.8% from the field and 14.3% (5-35) from beyond the arc. Portland State outrebounded Oregon by a 41-38 margin however and committed just 11 turnovers in the loss, however, struggled with fouls and allowed the Ducks to shoot 78.8% (26-33) from the FT-line. Leading the way for the Vikings was Holland Woods who had 13 points, 3 rebounds, and 3 assists. Jamie Orme chipped in with 11 points, 5 rebounds, and an assist while Derek Brown had 6 points, 7 rebounds, 1 block, and a steal in 18 minutes.

UC Riverside have yet to finished Big West play with an above .500 conference record and last year was no different as the Highlanders had a disappointing season finishing with an overall record of just 9-22 (4-12 Big West). The Highlanders made a coach change and hired David Patrick who had great connections some of the best players that have come out of Australia, however, it’s probably going to take a year or two to really get enough quality players on the roster to make some progress. UC Riverside does return Dikymbe Martin (13.5 ppg, 3.6 rpg, 2.8 apg), however, they are going to need some other players to step to help improve an offense that ranked just 333rd in scoring offense last season. Portland State made a name for themselves early last season after almost defeating both Butler and Duke, however, it’s going to be hard for the Vikings to relive that success as they lost their two top scorers in Deontae North (21.1 ppg, 4.9 rpg, 2.4 apg) & Bryce Canda (14.0 ppg, 6.0 rpg, 2.5 apg). Portland State does have some experience with Holland Woods & Deante Strickland and we should expect to see a similar style of in your in face pressure on the defensive end and plenty of threes on the offensive end.

I was impressed by how the Highlanders gave Oregon State a run for their money, and although I think Portland State will be able to hit some more threes on their home court, I think this line is a bit high and I’m taking the Highlanders to cover with the points.