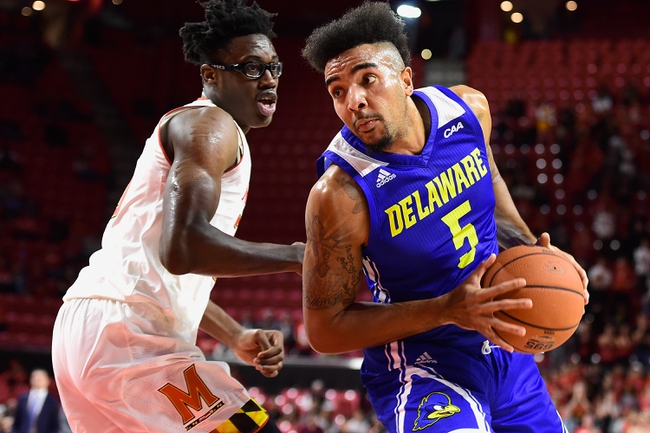 The Delaware Blue Hens will travel to the Yanitelli Center to take on the Saint Peter’s Peacocks this Saturday night in College Basketball action.

The Delaware Blue Hens will look to bounce back after losing their season opener to to the Maryland Terrapins, 73-67, this past Tuesday. Delaware went into halftime trailing by a 44-27 margin, however, made a solid comeback event, pulling within a 70-67 margin late, however, couldn’t complete the come back bid after Maryland sealed the victory with some FT’s. Delaware shot 40.0% from the field and 26.1% (6-23) from beyond the arc in the loss. Delaware was solid on the defensive end as although they allowed the Terrapins to shot 40.3% from the field, they held Maryland to just 10.5% (2-19) shooting from three-point range. Delaware was outrebounded by a 44-33 margin however, did win the turnover battle by a 12-11 margin. Leading the way for the Blue Hens was Eric Carter who had 29 points, 9 rebounds, 1 assist, 2 blocks & 2 steals. Kevin Anderson had a solid overall game contributing 6 points, 7 rebounds, 4 assists, 1 block & a steal while Ithiel Horton had 10 points, 6 rebounds, and a steal in 32 minutes from off the bench.

The Saint Peter’s Peacocks will look to improve to 2-0 on the young season after the Peacocks defeated the Lafayette Leopards, 93-86 (OT), this past Wednesday. Saint Peter’s trailed for the majority of the 2nd half however, was able to fight back late to forced OT and pulled away in overtime after an 8-2 run gave the Peacocks an 87-81 lead with 1:41 left in regulation. Saint Peters shot 45.1% from the field and 36.4% (12-33) from beyond the arc in the victory. The Peacocks held Lafayette to 42.4% shooting from the field however, did allow the Leopards to shoot 41.2% (14-34) from beyond the arc. Saint Peter’s outrebounded Lafayette by a 44-38 margin and won the turnover battle by a 15-11 margin. Leading the way for the Peacocks was Davauhnte Turner who had 25 points, 6 rebounds & 8 assists. Cameron Jones had a big game as he finished with a double-double with 15 points, 10 rebounds, & 3 assists while KC Ndefo also put up a double-double with 16 points & 10 rebounds in 31 minutes from off the bench.

St. Peter’s was somewhat successful last season thanks to a defense that ranked 31st in scoring defense, however, as it looked like that defense is going to not be as strong, I think the trio of Eric Carter, Ryan Allen, and Kevin Anderson will do enough to cover with the points. Take Delaware and the points.