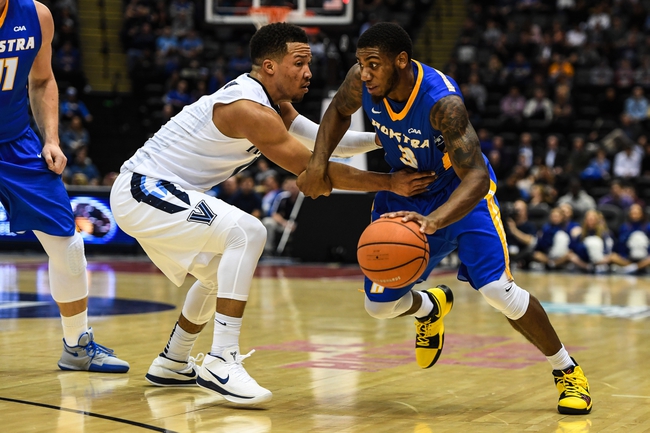 The Hofstra Pride will travel to the Cam Henderson Center to take on the Marshall Thundering Herd this Sunday afternoon in College Basketball action.

The Hofstra Pride kicked off their 2017-18 season on a winning note after they defeated the Mt. St. Mary’s Mountaineers, 79-61, this past Friday. Hofstra got off to a slow start as they trailed by 16-1 margin out of the gates, however, they fought back to take a 31-28 lead at halftime and pulled away after a 17-3 2nd half run gave Hofstra a 67-48 lead with 8:18 left in regulation. Hofstra shot 45.3% from the field and 39.1% (9-23) from beyond the arc while holding Mt. St. Mary’s to just 41.1% shooting from the field. Hofstra outrebounded the Mountaineers by a 41-32 margin and committed just 8 turnovers in the victory. Leading the way for the Pride was Justin Wright-Foreman who had 20 points, 7 rebounds, 5 assists, 1 block and a steal. Eli Pemberton chipped in with 18 points, 6 rebounds, and 2 assists while Desure Buie had a nice overall game with 18 points, 2 rebounds, 5 assists, and 2 rebounds.

The Marshall Thundering Herd will look to make it 2-0 on the young season after they defeated the Eastern Kentucky Colonels, 105-77, in their season opener this past Wednesday. Marshall has no trouble putting points up on the board in this one and easily cruised to victory after they went into halftime with a 57-38 lead. Marshall shot 50.0% from the field while holding Eastern Kentucky to just 32.5% shooting from the field and 11.1% shooting from beyond the arc. Marshall outrebounded Eastern Kentucky by a 53-49 margin and forced the Colonels into committing 17 turnovers in the victory. Leading the way for the Thundering Herd was C.J. Burks who had 30 points (12-15 FG), 3 assists, 1 rebound, and 2 steals. Jon Elmore struggled a bit with his shot, however, still finished the game with 20 points, 4 rebounds, 6 assists, and 3 blocks. Jannson Williams also chipped in with 11 points & 8 rebounds.

Hofstra has one of the best pure scorers in the CAA this season in Justin Wright-Foreman and once again will be leading an offense that ranked 49th in scoring offense & 77th in FG% last season. Hofstra has a great backcourt and hope that Jacquil Taylor (graduate transfer from Purdue) will help replace that loss of Rokas Gustys. Marshall showed how dangerous their offense can be last season after  upsetting Wichita State in the NCAA Tournament and that offense will be lethal again with both Jon Elmore and C.J. Burks back this season. Marshall ranked just 325th in scoring defense last season however, they have an offense that can more than make up for their defensive miscues and should be one of the favorites to earn the automatic bid from the C-USA conference for the 2nd straight year.

I expect this to be a high scoring game as both teams have great high scoring backcourts. Marshall is going to be tough beat on the road however, as I think Justin Wright-Foreman and Eli Pemberton will be able to put up plenty of points on their own, I’m taking the Pride to cover with the points.