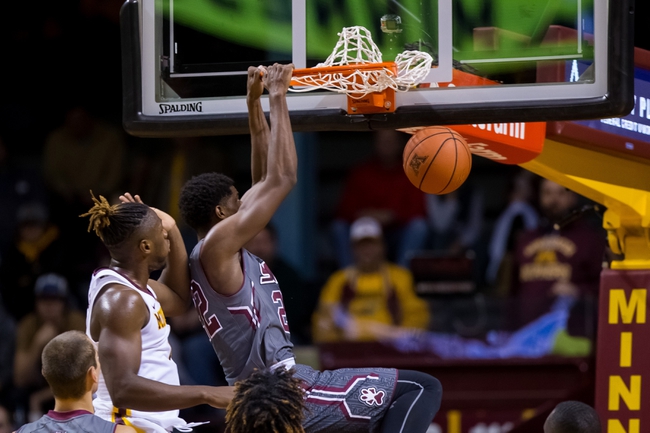 The Buffalo Bulls will travel to SIU Arena to take on the Southern Illinois Salukis this Monday night in College Basketball action.

The Buffalo Bulls improved to 2-0 on the season after upsetting the 13th ranked West Virginia Mountaineers, 99-94 (OT), on the road this past Friday. Buffalo was able to force OT after trailing by a 68-56 margin with 8:55 left in regulation and had no trouble securing the victory after starting the OT period on an 11-2 run. Buffalo shot 40.0% from the field while allowing the Mountaineers to shoot 43.9% from the field and 33.3% from beyond the arc. The Bulls outrebounded West Virginia by a 50-46 margin while winning the turnover battle by a 19-11 margin. Leading the way for the Bulls was CJ Massinburg who had a monster double-double with 43 points, 14 rebounds, 3 assists, and a block. Jeremy Harris had a solid overall game as he poured in 16 points, 9 rebounds, 5 assists, 1 block, and a steal while Jayvon Graves chipped in 14 points, 4 rebounds, 2 steals, and an assist.

The Southern Illinois Salukis fought hard however, came up short in their season openers after falling to the 2nd ranked Kentucky Wildcats, 71-59, this past Friday. Southern Illinois led by a 46-40 margin almost midway though the 2nd half, however, the offense struggled down the stretch and couldn’t fight back after Kentucky took a 61-52 lead with 5:39 left in regulation. Southern Illinois shot 41.1% from the field while allowing the Wildcats shoot 44.4% from the field and 28.6% from beyond the arc. Southern Illinois did a great job forcing turnovers as they won the turnover battle by a 19-13 margin, however, the Salukis were dominated on the boards, losing the rebound battle by a 48-19 margin. Leading the way for the Salukis was Kavion Pippen who had 16 points, 7 rebounds, 3 assists, and 2 Steals. Aaron Cook chipped in with 18 points (7-12 FG), 2 assists, and 2 steals while Armon Fletcher had 8 points & 3 rebounds in 15 minutes.

Southern Illinois comes into this season with high expectations as they returned basically everyone from a 20-win team last year that finished 2nd in the Missouri Valley Conference. The Salukis are led by a solid backcourt of Armon Fletcher & Aaron Cook and have a solid frontcourt led by Kavion Pippen and Thik Bol who is back this year after missing last season due to injury.

This is going to be a great game on Monday night as both Buffalo and Southern Illinois should make plenty of noise this season in their respective mid-major conferences. I think a lot of people are going to be on Buffalo after their victory at West Virginia however, I think Southern Illinois is the more well-rounded team and as the Salukis should have a solid advantage in the front court, I’m taking Southern Illinois at home with the points.