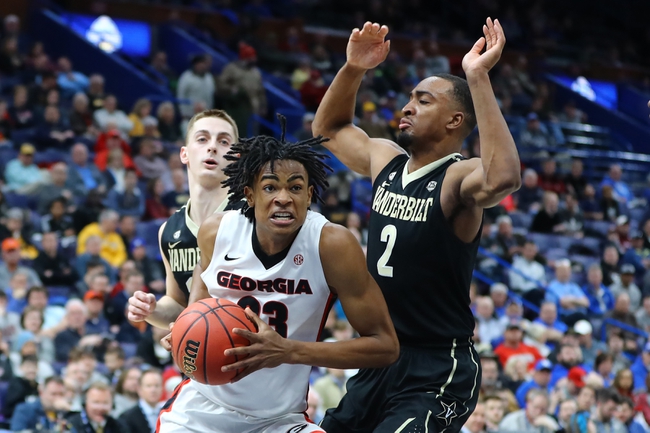 The Georgia Bulldogs will travel to the Liacouras Center to take on the Temple Owls this Tuesday night in College Basketball action.

The Georgia Bulldogs will look to make it 2-0 on the young season after they opened their year with a 110-76 victory of the Savannah State Tigers this past Friday. The Bulldogs looked sharp in Tom Crean’s debut as they dominated the Tigers on both ends of the court and had no trouble securing the victory after taking a 59-34 lead at halftime. Georgia shot 57.1% from the field and 40.7% from beyond the arc while holding Savannah State to just 31.2% from the field. Georgia outrebounded Savannah State by a 62-41 margin however, did commit 23 turnovers in the loss. Leading the way for the Bulldogs was Nicolas Claxton who had a double-double with 15 points, 13 rebounds, 2 assists, and 5 blocks. Teshaun Hightower contributed with 18 points, 5 rebounds, 4 assists, and 2 steals while Derek Ogbeide had 12 points and 7 rebounds in just 13 minutes of action.

Tom Crean enters Georgia with a rebuilding project on his hands as although the Bulldogs do bring back some solid experience in Nicolas Claxton, Derek Ogbeide, and William Jackson II they did lose their best player in big-man Yante Maten. Crean will have a deep bench but the lack of superstar talent for the Bulldogs will make it challenging for them to have major success in their first season under Crean.

The Temple Owls improved to 2-0 on the young season after they defeated the Detroit Mercy Titans, 83-67, this past Friday. Temple struggled defensively in the 1st half in this one and the Owls found themselves down by a 41-37 margin at halftime, however, Temple picked it up on both ends of the court in the 2nd half and had no trouble securing the victory after a 20-2 Owls run gave Temple a 63-48 lead midway through the 2nd half. Temple shot 46.8% from the field and 40.7% from beyond the arc, however, did allow the Titans to shoot 48.1% from the field. Temple outrebound Detroit Mercy by a 38-27 margin and forced the Titans to commit 19 turnovers in the victory. Leading the way for the Owls was Shizz Alston Jr. who had 30 points, 5 rebounds, 4 assists, and a steal.

Temple has had some easy matchups to start the season and although they’re not a bad team, I think Georgia has the size and depth to give the Owls some trouble. This is going to be a close game however, as long as Georgia contains Shizz Alston Jr., I think they’ll do enough on the road to cover with the points.