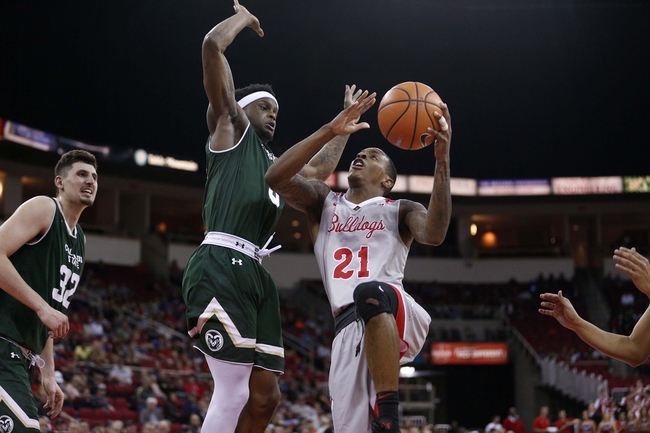 The Fresno State Bulldogs will travel to Ed And Rae Schollmaier Arena to take on the 21st ranked TCU Horned Frogs this Thursday night in College Basketball actin.

The Fresno State Bulldogs opened their 2018-19 season with a victory as they defeated the D-II Alaska Anchorage Seawolves, 91-63, on November 6th. Fresno State was solid on the defensive end and pulled away for victory in the 2nd half after a 9-0 Bulldogs run gave Fresno State a 69-45 lead with 9:25 left in regulation. Fresno State shot 47.5% from the field while holding the Seawolves to just 33.8% shooting from the field & 27.6% (8-29) shooting from beyond the arc. Fresno State was outrebounded by a 45-38 margin however, won the turnover battle by a 17-8 in the victory. Leading the way for the Bulldogs was Braxton Huggins who had 23 points, 2 rebounds, 3 assists, 1 block, and a steal.

The 21st ranked TCU Horned Frogs improved to 2-0 on the young season after defeating the Oral Roberts Golden Eagles, 79-62, this past Sunday. TCU controlled the game on both ends of the court from the opening tip-off and had no trouble securing the victory after taking a 56-40 lead midway through the 2nd half. TCU shot 50.9% from the field and 46.7% (7-15) from beyond the arc while holding Oral Roberts to just 36.5% shooting from the field. TCU outrebounded Oral Roberts by a 42-33 margin however, did lose the turnover battle by a 16-13 margin. Leading the way for the Horned Frogs was Desmond Bane who had 22 points, 2 rebounds, 5 assists, and 2 steals.

TCU is going to be a tough team however, they are still without Jaylen Fisher who is recovering from a knee injury and do have some question marks when it comes to scoring as they no longer have Vladimir Brodziansky & Kenrich Williams. Fresno State lost a bunch of talent however returns a great player in Deshon Taylor and should have some solid experience with Huggins & Blackwell. TCU is the better team however, as they even struggled to put up points against CSU Bakersfield in their season opening 66-61 win, I think giving up double-digit points is just too much. I’m taking Fresno State and the points.