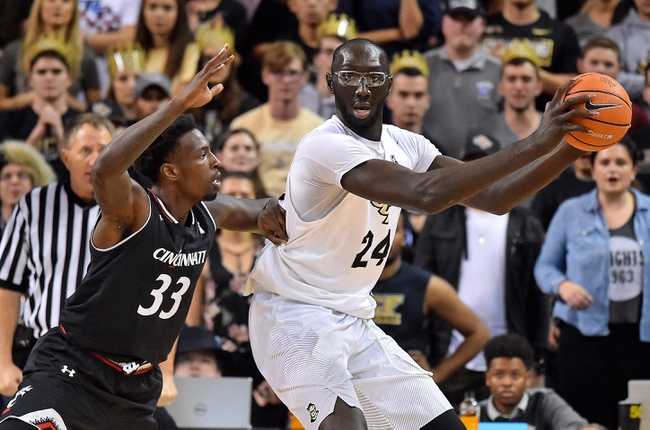 The Saint Joseph’s Hawks and UCF Knights will face off this Friday afternoon at the HTC Center in the Myrtle Beach Invitational.

The Saint Joseph’s Hawks improved to 3-0 on the young season after defeating the Wake Forest Demon Deacons, 89-69, in the 1st round of the Myrtle Beach Invitational on Thursday afternoon. Saint Joseph’s was outstanding on the offensive end in the victory and pulled away in the 2nd half after an 8-0 run gave the Hawks a 66-54 lead with 11:41 left in regulation. Saint Joseph’s shot 51.6% from the field & 53.3% from beyond the arc in the victory. The Hawks outrebound the Demon Deacons by a 33-32 margin and committed just 8 turnovers. Leading the way for Saint Joseph’s was Charlie Brown Jr. who had 26 points, 3 rebounds, 1 assist, 2 blocks, and 3 steals.

The UCF Knights improved to 2-1 on the season after defeating the CSU Fullerton Titans, 68-52, in their 1st round matchup of the Myrtle Beach Invitational. UCF was outstanding on the defensive end and was easily able to secure the victory after a 12-4 Knights run gave UCF a 62-37 lead with 6:19 left in regulation. UCF shot 43.3% from the field while holding CSU Fullerton to just 34.5% shooting from the field and 23.5% from beyond the arc. UCF outrebounded the Titans by a 39-25 margin and won the turnover battle by a 12-10 margin in the victory. Leading the way for the Knights was Tacko Fall who had a double-double with 12 points, 10 rebounds, 2 assists, and 3 blocks.

Saint Joseph’s has started off this season with solid wins and has been outstanding on the offensive side of the ball, however, UCF is going to be the toughest competition they’ve seen so far this year. The Knights have great experience and two great impact players in B.J. Taylor & Tacko Fall and as I think the Hawks offense will struggle a bit in what will be there toughest game to date on the young season, I’m initially leaning on taking UCF as I imagine the line will be pretty close to even in this one. Check back later once the line has been released.

Update (12:45 PM) - The line is about where I thought it was going to be and I'm sticking with UCF to cover this small spread. Good Luck!