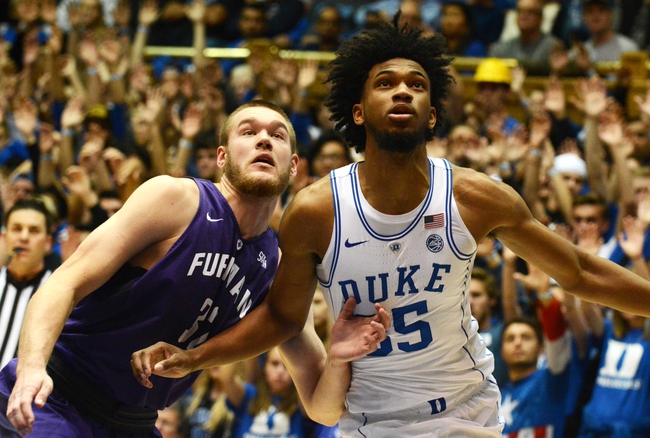 The Furman Paladins will travel to Finneran Pavilion to take on the 8th ranked Villanova Wildcats this Saturday night in College Basketball action.

The Furman Paladins improved to 4-0 on the young season after defeating the D-II North Greenville Crusaders, 107-67, this past Thursday. Furman’s Jordan Lyons has his way from beyond the arc, tying an NCAA record with 15 three-pointers and had no trouble pulling away in the 2nd half after taking a 55-38 lead. Furman shot 47.2% from the field and 42.9 (21-49) from beyond the arc in the win. The Paladins were outrebounded by the Crusaders by a 41-40 margin however, won the turnover battle by a 18-6 margin in the victory. Leading the way for the Paladins was Jordan Lyons who had 54 points, 2 rebounds, 4 assists, and 2 steals.

The 8th ranked Villanova Wildcats dropped to 1-2 on the season and will look to bounce back after suffering a 73-46 blowout loss to the 18th ranked Michigan Wolverines this past Wednesday. In one of the worst performances we’ve seen out of Villanova in years, the Wildcats had no answers on either end of the court for Michigan and couldn’t fight back after falling behind by a 44-17 margin at halftime. Villanova allowed Michigan to shoot 50.9% from the field while the Wildcats shot just 31.8% from the field and 20.0% from beyond the arc. Turnovers were a major issue for the Wildcats as they lost the turnover battle by a 21-7 margin.

Villanova still has two of the best players in the Big East in Phil Booth and Eric Paschall, however, there was some worry that the Wildcats could be not as strong as we’ve seen in recent years and obviously after that loss to Michigan, the concerns are look like they are for real. Furman also loss some solid talent from their 23-win team, however, they still have Matt Rafferty and a solid group around him that can really light up a scoreboard. It’s hard not to take a Villanova team that you would imagine will come out strong after such a bad performance however Furman is an average team that has already beaten Loyola-Chicago on the road this season and I just think this is just too many points to pass up on. Take Furman and the points.