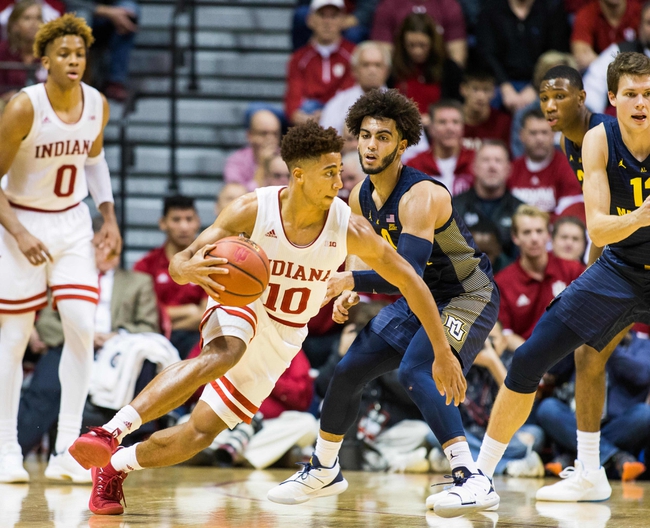 The Indiana Hoosiers and the Arkansas Razorbacks meet in college basketball action from Bud Walton Arena on Sunday afternoon.

The Indiana Hoosiers will look to remain perfect after a 96-73 win over Marquette in their last outing. Romeo Langford led the Hoosiers with 22 points on 8 of 15 shooting with 3 assists and a pair of blocks while Evan Fitzner added 16 points on 6 of 7 shooting with 4 threes. Juwan Morgan and Aljami Durham each added 13 points on 5 of 8 shooting, with Morgan leading Indiana with 8 rebounds while Durham chipped in 5 assists. Rob Phinisee added 12 points on 5 of 7 shooting with 8 assists to round out the scoring in double figures for the Hoosiers in the win. Langford leads Indiana with 17.7 points per game while Morgan leads the Hoosiers in rebounding with 9 rebounds per game and Phinisee is the Hoosiers’ top assist man with 4.7 assists per game this season. As a team, Indiana is averaging 93.3 points per game on 58.6% shooting from the field, 35.5% from behind the arc and 61.3% from the foul line this season.

The Arkansas Razorbacks will look to build on their first win of the season, coming in the form of an 81-58 beatdown of UC-Davis in their last outing. Mason Jones led the Hogs with 21 points on 6 of 10 shooting with 4 threes and a team-high 8 rebounds while Adrio Bailey came right behind with 20 points. Isaiah Joe added 14 points and 3 steals while Daniel Gafford chipped in 12 points and 4 blocks to round out the quartet of double-digit scorers for the Razorbacks in the winning effort. Jalen Harris scored just 2 points but dished out a team-high 4 assists in the win for Arkansas. Gafford leads the Hogs with an average of 16 points and 8 rebounds per game while Harris leads Arkansas in assists with 4 helpers per game this season. As a team, Arkansas is averaging 76 points per game on 43.6% shooting from the field, 38.1% from behind the arc and 61.5% from the foul line this season.

Arkansas getting points at home is tempting, but this is too low of a line for me to pass up considering how well Indiana is putting points on the board so far this season. The Razorbacks definitely have a rest advantage, but some slight rust could come along with that and rust isn’t what you want to have when you play a team like Indiana. I’ll lay the points with the Hoosiers here.