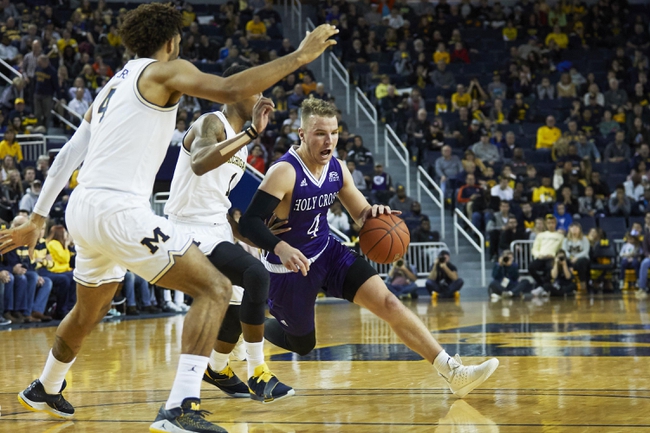 The Siena Saints and Holy Cross Crusaders will face off in the Championship game of the Air Force Reserve Tip-Off Tournament – Springfield Bracket this Sunday morning at Mohegan Sun Arena.

The Siena Saints won their 2nd straight game and improved to 2-1 on the season after defeating the Norfolk State Spartans, 61-58, this past Friday. Siena fought back from a 31-26 halftime deficit to take a 54-47 lead with 8:17 left in regulation and held on late to secure the victory. Siena shot 41.9% from the field and 36.7% shooting from beyond the arc while holding Norfolk to just 39.3% shooting from the field. The Saints lost the rebound margin by a 35-26 margin however, committed just 10 turnovers in the win. Leading the way for the Saints was Jalen Pickett who had 12 points, 4 rebounds, 4 assists, 3 steals, and a block.

The Holy Cross Crusaders snapped a 2-game losing steak and improved to 2-2 on the season after defeating the Stony Brook Seawolves, 84-70, this past Friday. Holy Cross was outstanding on both ends of the court and had no trouble securing the victory after a 16-3 run to start the 2nd half gave the Crusaders a 59-39 lead with 12:24 left in regulation. Holy Cross shot 50.0% from the field while holding Stony Brook to just 39.3% from the field and 28.6% shooting from beyond the arc. Holy Cross was outrebounded by Stony Brook by a 36-28 margin however, won the turnover battle by a 12-6 margin. Leading the way for the Crusaders was Jacob Grandison who had a double-double with 21 points, 10 assists, 8 rebounds, 1 block, and a steal.

Siena has picked up back to back wins, however, I’m still very hesitant in concerning that Siena is a decent team this season as this is a team that is very inexperienced and looks like has very little scoring punch.  Holy Cross had an impressive win agianst Stony Brook and should be a contender in the Patriot League this season and are primed to have a successful season with an experience team that should be solid on the defensive end. Holy Cross has already played some tough competition in Michigan & Providence this season and as I just think they are more talented on both ends of the court, I’m taking the Crusaders to cover this spread.