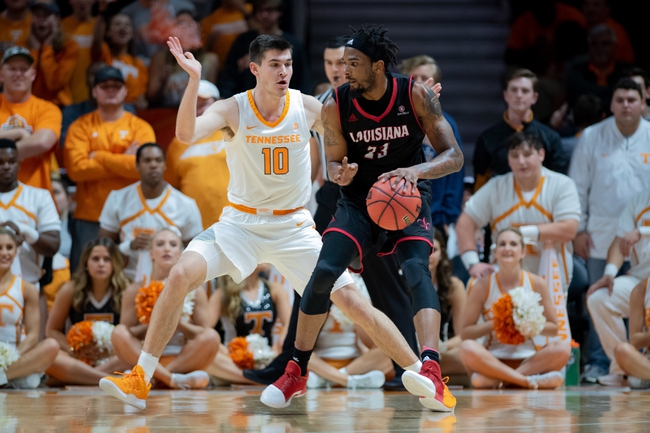 The Louisiana Ragin’s Cajuns and Toledo Rockets will square off in the semifinals of the Gulf Coast Showcase at Hertz Arena this Tuesday night.

The Toledo Rockets improved to 3-1 on the season after defeating the Florida Gulf Coast Eagles, 90-62, in the 1st round of the Gulf Coast Showcase last night. Toledo was outstanding on the offensive end agianst the Rockets and had to trouble securing the victory after taking a 42-25 halftime lead. Toledo shot 50.9% from the field and 57.1% from beyond the arc in the win. Toledo outrebounded Florida Gulf Coast by a 40-28 margin and committed just 13 turnovers in the win. Leading the way for the Rockets was Jaelan Sanford who had 18 points, 3 rebounds, 5 assists, and a steal.

Louisiana might be just 2-2 on the season however, but don’t read too much into those losses as they both came on the road against Tennessee & Kansas. Louisiana lost a few key players from last year’s 27-win team, but also returned a bunch of experience and have looked explosive on the offensive end as they rank 37th in scoring offense, 43rd in FG%, and  T-13th in three-pointers made per game. Toledo is in a similar situation as the Ragin’s Cajuns as although they  lost their best player from a 23-win team last season, they bring back a bunch of solid players and so far have been great offensively as they rank 42nd in scoring offense and 71st in FG%. The line has yet to be released, however, as I think the line will pretty close in this one, I’m initially leaning on taking the Ragin’s Cajuns as they are just a bit more battled tested this season and I think they’ll outlast the Rockets in a high-scoring affair.

Update (10:56 AM) - The line is about where I thought it would be with Louisiana favored by a small margin and I'm staying with my initial thoughts and going with the Ragin' Cauns in this one. Good Luck!