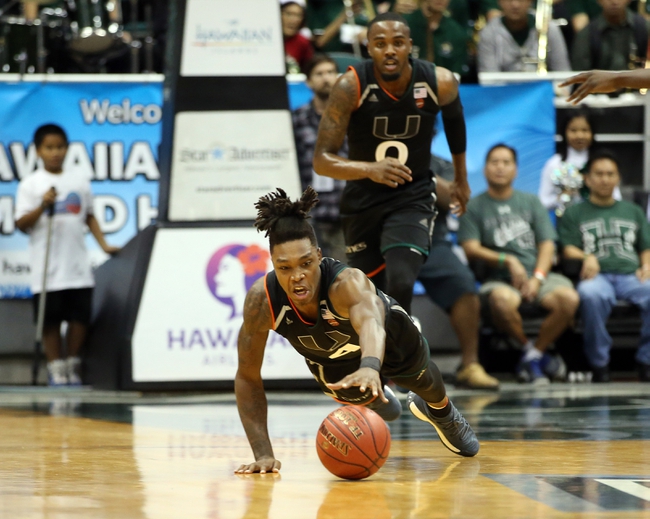 The Hawaii Rainbow Warriors and Utah Utes will face off this Tuesday night at Titan Gym in the 1st round of the Wooden Legacy.

Defensively, Hawaii is allowing their opponents to average 63.5 ppg on 41.7% shooting from the field. The Rainbow Warriors have a rebound margin of 5.5 and a turnover margin of 2.5.

The Utah Utes improved to 2-1 on the season after defeating the Mississippi Valley State Delta Devils, 98-63, this past Thursday. Utah was outstanding from the offensive end and had no trouble securing the victory after taking a 66-39 lead with 14:49 left in regulation. Utah shot 51.5% from the field and 47.2% from beyond the arc in the victory. Utah outrebounded Mississippi Valley State Delta Devils by a 44-33 margin and won the turnover margin by a 12-10 margin. Leading the way for the Utes was Parker Van Dyke who had 16 points, 3 rebounds, 2 assists, 1 block, and a steal in 30 minutes from off the bench.

Defensively, Utah is allowing their opponents to average 67.3 ppg on 43.1% shooting from the field. The Utes have a rebound margin of 9.0 and a turnover margin of -0.3.

Hawaii has a ton of experience and although they haven’t played much in competition in their three wins, they have been solid on the defensive end as they rank T-63rd in scoring offense & T-102nd in rebound margin. Utah looks like they are going to take a step back this season as they lost a bunch of experience from last year’s team and although they picked up some easy wins over Maine & Mississippi State Valley, the Utes didn’t look that great in their only road game this season, a 78-69 loss at Minnesota. Utah should be able to pick up the victory here however, I think Hawaii is going to keep this a close game and I’m going with the Rainbow Warriors and the points.