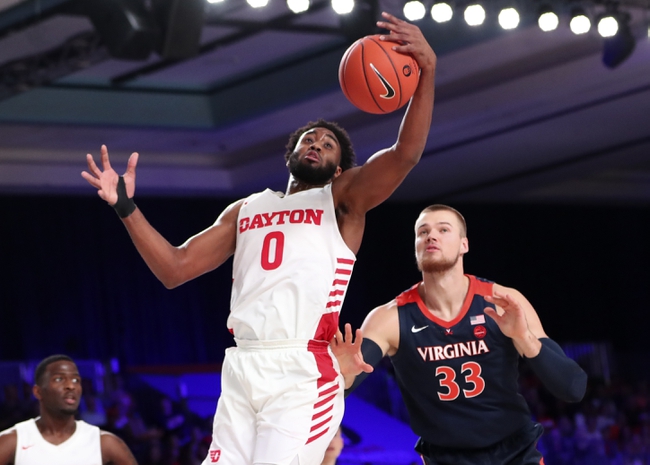 The Oklahoma Sooners and Dayton Flyers will face off in the consolation game of the Bad Boy Mowers Battle 4 Atlantis at Imperial Arena this Friday morning.

The Oklahoma Sooners suffered their first loss of the season, dropping to 4-1 on the season, after being defeated by the 25th ranked Wisconsin Badgers, 78-58, yesterday afternoon. Oklahoma struggled defensively agianst the Badgers and couldn’t fight back after a 10-0 Wisconsin run gave the Badgers a 60-41 lead with 9:24 left in regulation. Oklahoma shot 47.1% from the field however, allowed Wisconsin to shoot 47.5% from the field and 63.6% from beyond the arc. Oklahoma was outrebounded by Wisconsin by a 33-31 margin and lost the turnover battle by a 15-8 margin. Leading the way for the Sooners was Christian James who had 18 points, 2 rebounds, 1 assist, and a steal.

Defensively, Oklahoma was allowing their opponents to an average of 66.8 ppg on 38.5% shooting from the field. The Sooners had a rebound margin of 6.5 and a turnover margin of 1.3.

The Dayton Flyers had their 4-game winning streak snapped and dropped to 4-1 on the season after being defeated by the 4th ranked Virginia Cavaliers, 66-59, yesterday afternoon. Dayton has some decent success against the Virginia defense, however, couldn’t pull off the upset victory after Virginia took a 60-52 lead with 3:31 left in regulation. Dayton shot 54.3% from the field and 35.7% from beyond the arc in the loss. The Flyers were outrebounded by a 30-27 margin and lost the turnover battle by a 14-9 margin. Leading the way for the Flyers was Josh Cunningham who had 15 points, 5 rebounds, and a steal.

Defensively, Dayton was allowing their opponents to average 65.0 ppg on 41.4% shooting from the field. The Flyers had a rebound margin of 5.8 and a turnover margin of 0.8.

Oklahoma has a solid player in Christian James, however, this Sooners team lacks depth after a few key players transferred and could be in for a long season once Big 12 play starts. Dayton wasn’t projected to do much in the A-10 this year, however, this team has looked good early on the season as they have six players that are contributing with solid numbers and have an outstanding player in Josh Cunningham. The line has yet to be released for this game however, Dayton has been solid on both ends of the court to start the season and as I think this line will be pretty close to even, I’m initially leaning on taking the Flyers.

Update (9:53 PM) - Dayton is getting a few more points that I expected which I'm more than happy with as I think they have a good chance to win this game outright. We're 2-0 ATS with Dayton in this tournment and I think they'll make it 3-0 ATS this morning! Good Luck!