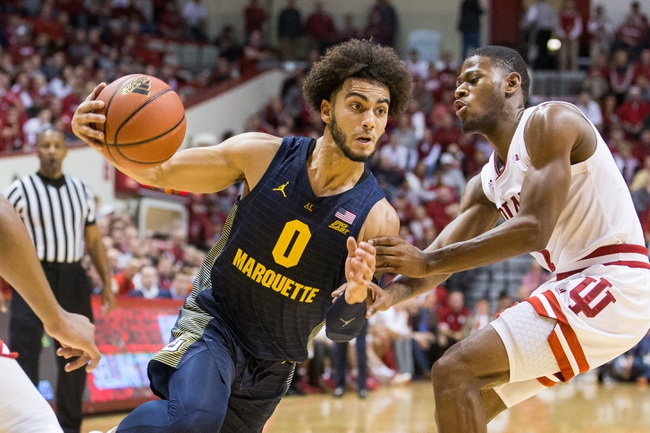 The Louisville Cardinals and Marquette Golden Eagles will face off this Friday night at the Barclays Center in the consolation game of the NIT Season Tip-Off.

The Louisville Cardinals dropped to 3-1 on the season after being defeated by the 5th ranked Tennessee Volunteers, 92-81, this past Wednesday. Louisville gave the Volunteers a game, however, couldn’t fight back after a 14-0 Tennessee run gave the Volunteers an 85-70 lead with 5:18 left in regulation. Louisville shot 44.1% from the field and 39.3% from beyond the arc, however, allowed Tennessee to shoot 54.0% from the field in the loss. Louisville was outrebounded by Tennessee by a 38-32 margin and lost the turnover battle by a 14-10 margin. Leading the way for the Cardinals was Jordan Nwora who had a double-double with 23 points, 10 rebounds, and a block in 26 minutes from off the bench.

Defensively, Louisville is allowing their opponents to average 74.0 ppg on 45.1% shooting from the field. The Cardinals have a rebound margin of 6.0 and a turnover margin of 0.8.

The Marquette Golden Eagles dropped to 3-2 on the young season after being defeated by the 2nd ranked Kansas Jayhawks, 77-68, this past Wednesday. Marquette went into halftime with a solid 47-38 lead however, allowed Kansas to take control of the game after being held scoreless for the 9 minutes of the 2nd half. Marquette shot 41.7% from the field while allowing Kansas to shoot 48.3% from the field and 50.0% from beyond the arc. The Golden Eagles were outrebounded by the Jayhawks by a 38-31 margin and forced Kansas into committing just 8 turnovers. Leading the way for the Golden Eagles was Sam Hauser who had 20 points, 6 rebounds, 1 assist, and a steal.

Defensively, Marquette is holding their opponents to an average of 65.8 ppg on 38.0% shooting from the field. The Golden Eagles have a rebound margin of 5.6 and a turnover margin of -3.8.

Louisville looked good agianst Tennessee however, their defense is a concern as they come into this game ranked just 231st in scoring defense and 256th in defensive FG%. Marquette let a great opportunity slip through their fingers against the Jayhawks, and although their offensive has surpingsly struggled, the Golden Eagles have great offensive weapons in Markus Howard & Sam Hauser. Marquette has looked a bit better on the defensive end then what we’ve seen in past seasons and as I think their offense had no trouble with the Cardinals, I’m taking the Golden Eagles to cover this small spread.