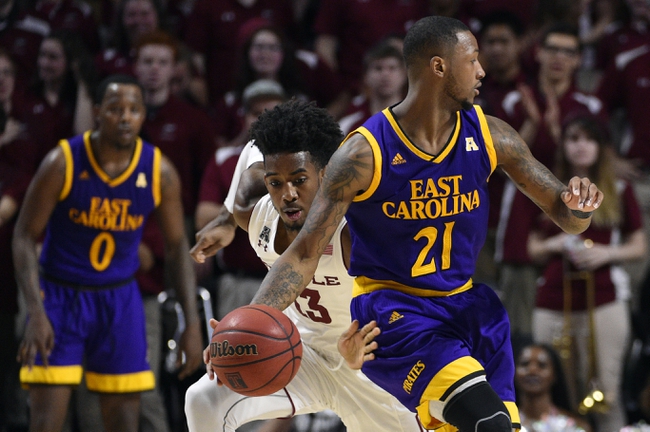 The East Carolina Pirates will travel to Trask Coliseum to take on the UNC Wilmington Seahawks this Tuesday night in College Basketball action.

The East Carolina Pirates had their 2-game winning streak snapped and dropped to 4-3 on the season after being defeated by the High Point Panthers, 55-52, this past Saturday. East Carolina fought back from a double-digit deficit in the 2nd half to make it a game late, however, couldn’t secure the come from behind victory after the Panthers took a 55-51 lead with just 19 seconds left in regulation. East Carolina shot just 21.4% from beyond the arc and was outrebounded by High Point by a 32-27 margin in the victory. Leading the way for the Panthers was Jayden Gardner who had 18 points, 3 rebounds, and a block.

Defensively, East Carolina is holding their opponents to an average of 67.0 ppg on 38.1% shooting from the field. The Pirates have a rebound margin of 5.4 and a turnover margin of -2.9.

The UNC Wilmington Seahawks improved to 3-4 on the season after defeating the Eastern Illinois Panthers, 82-65, this past Sunday. UNC Wilmington was outstanding on the offensive end agianst the Panthers and had no trouble securing the victory after taking a 45-32 lead. UNC Wilmington shot 55.9% from the field, 52.4% from beyond the arc, and outrebounded Eastern Illinois by a 37-26 margin in the victory. Leading the way for the Seahawks was Devontae Cacok who had a double-double with 17 points, 13 rebounds, and 2 steals.

Defensively, UNC Wilmington is allowing their opponents to average 76.4 ppg on 45.2% shooting from the field. The Seahawks have a rebound margin of 7.6 and a turnover margin of -4.7.

East Carolina & UNC Wilmington play very different styles of basketball as the Pirates are more of a defensive oriented team while the Seahawks love to push the pace. UNC Wilmington has more talent on the floor however, I’m a bit concerned about their turnover margin (-4.7; ranked 327th in CBB) and their defense that ranks 276th in scoring defense. East Carolina should be able to find a bit more success on the offensive end than what we’ve seen from the Pirates this season and although I don’t think they’ll win the game, East Carolina should do enough to cover with the points.