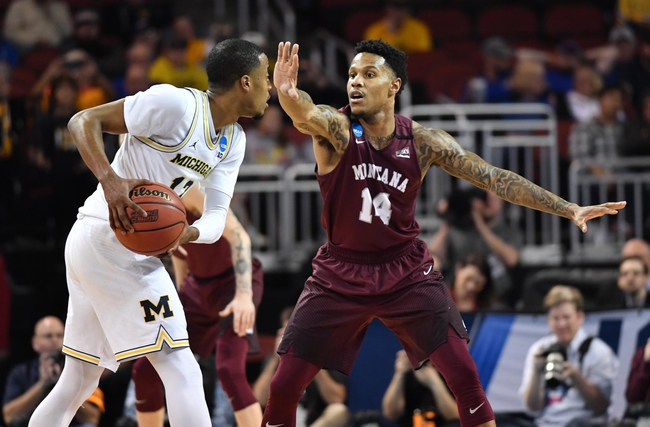 The Montana Grizzlies will travel to CHI Health Center Omaha to take on the Creighton Bluejays this Wednesday night in College Basketball action.

The Montana Grizzlies lost their first game on the season and dropped to 4-1 on the season after being defeated by the Georgia Southern Eagles, 80-77, this past Sunday. Montana fought back to make it a 1-point game with 1:55 left in regulation after tailing by a 51-31 margin at halftime, however, their comeback attempt came up short after the Grizzlies missed multiple game-tying three-point attempts in the closing seconds of regulation. Montana shot 50.0% from the field however, allowed Georgia Southern to shoot 51.9% from the field and 31.3% from beyond the arc in the loss. Leading the way for the Grizzlies was Ahmaad Rorie who had 19 points, 6 assists, 3 rebounds, and a steal.

Defensively, Montana is allowing their opponents to average 69.2 ppg on 42.1% shooting from the field. The Grizzlies have a rebound margin of 0.2 and a turnover margin of 2.2.

The Creighton Bluejays won their 3rd straight game and improved to 5-1 on the season after defeating the 16th ranked Clemson Tigers, 87-82, in the Championship game of the Cayman Islands Classic this past Wednesday night. Creighton and their high-powered offense had no trouble putting up points against the Tigers and the Bluejays were able to hang on late for the victory after taking a 71-59 lead with 5:41 left in regulation. Creighton shot 55.8% from the field and 38.5% from beyond the arc in the victory. Leading the way for the Bluejays was Ty-Shon Alexander who had 36 points, 4 rebounds, 1 assist, and a steal.

Defensively, Creighton is allowing their opponents to average 72.8 ppg on 44.9% shooting from the field. The Bluejays have a rebound margin of -3.5 and a turnover margin of 0.8.

Montana is the team to beat in the Big Sky this season as they basically returned the same team that won 26 games last season and gave Michigan a run for their money in the 1st round of the NCAA Tournament. Montana is solid on both ends of the court and have a great backcourt in Ahmaad Rorie & Michael Oguine which have the Grizzlies ranked 8th in CBB in terms of FG%. Creighton experienced a bunch of turnover from last year’s team, however, the early results have been solid as they recently upset Clemson and gave Ohio State a run for their money in a 69-60 loss. Creighton is led by their offense that ranks T-79th in scoring offense, 7th in FG%, and 5th in 3P-FG%. Creighton has been playing well, however, Montana is one of the better mid-majors in the country and as they have the talent and experience to play the Bluejays tough, I’m taking the Grizzlies and the points in this one.

The pick in this article is the opinion of the writer, not a Sports Chat Place site consensus.
Previous Pick
Western Illinois vs. Southern Illinois-Edwardsville - 11/28/18 College Basketball Pick, Odds, and Prediction
Next Pick
Utah State vs. Northern Iowa - 11/28/18 College Basketball Pick, Odds, and Prediction