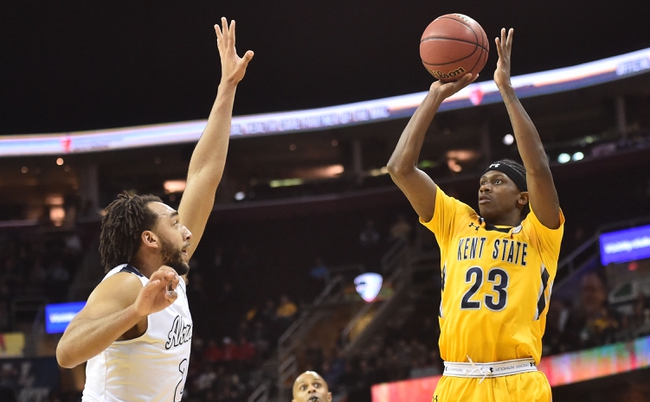 The Kent State Golden Flashes will travel to Calihan Hall to take on the Detroit Mercy Titans this Wednesday night in College Basketball action.

The Kent State Golden Flashes won their 3rd straight game and improved to 5-1 on the season after defeating the Vanderbilt Commodores, 77-75, this past Friday at the Commodore Classic. Kent State was able to take advantage after the Commodores lost one of their best players in Darius Garland early in the game and was solid down the stretch at the FT line, hitting 9 of 10 free-throws in the final 40 seconds of regulation, to secure the huge road victory. Kent State shot 44.6% from the field and 50.0% from beyond the arc in the victory. Leading the way for the Golden Flashes was Jaylin Walker who had 22 points, 4 rebounds, 2 assists, 1 block, in his first game of the season after missing the Golden Flashes first four games due to a suspension.

Defensively, Kent State is allowing their opponents to average 72.0 ppg on 43.9% shooting from the field. The Golden Flashes have a rebound margin of 3.2 and a turnover margin of 3.7.

The Detroit Mercy Titans won their 3rd straight game and improved to 3-3 on the season after defeating the Eastern Michigan Eagles, 78-74, this past Saturday. Detroit Mercy was outstanding from long-range in this one and was able to pull away later after a 10-0 Titans run gave Detroit Mercy a 71-62 lead with 2:22 left in regulation. Detroit Mercy shot 41.9% from the field and 50.0% from beyond the arc in the victory. Leading the way for the Titans was Antoine Davis who had 24 points, 7 rebounds, 7 assists, and a steal.

Defensively, Detroit Mercy is allowing their opponents to average 76.7 ppg on 43.4% shooting from the field. The Titans have a rebound margin of -8.0 and a turnover margin of 1.2.

Kent State has gotten off to a nice start to their season and although they will have trouble agianst teams that have talented front courts, the backcourt of Jaylin Walker and Jalen Avery should be able to matchup with about any team that is on the Golden Flashes schedule. Detroit Mercy is on a surprising 3-game winning streak thanks to the efforts to Antonine Davis and their three-point shooting as the Titans come into this game ranked 5th in three-pointers made per game and 4th in 3P-FG%. Detroit Mercy is playing well, however, Kent State won’t be exposed by the Titans front court that ranks T-337th in rebound margin and as I think Walker and Adams will have a field day agianst the Titans defense, I’m taking Kent State to cover this road spread.