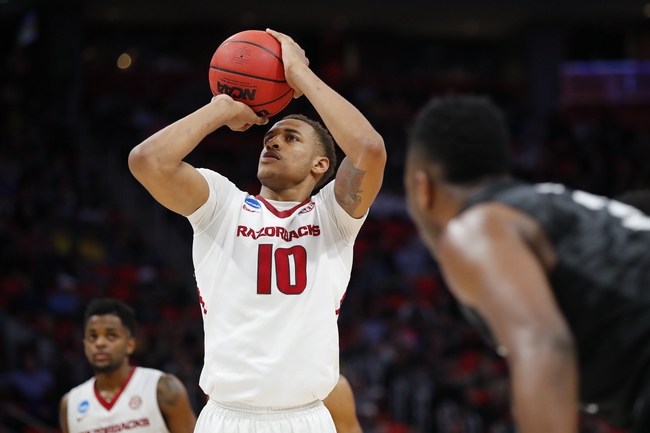 The Florida International Golden Panthers will travel to Bud Walton Arena to take on the Arkansas Razorbacks this Saturday night in College Basketball action.

Defensively, Florida International is allowing their opponents to average 80.1 ppg on 42.6% shooting from the field. The Golden Panthers have a rebound margin of -5.8 and a turnover margin of 8.9.

The Arkansas Razorbacks won their 4th straight game and improved to 4-1 on the season after defeating the UT-Arlington Mavericks, 78-60, on November 23rd.  Arkansas dominated UT-Arlington on the defensive end and pulled away for the victory after taking a 68-53 lead with 4:22 left in regulation. Arkansas held the Mavericks to just 32.7% from the field and 22.2% from beyond the arc in the victory. Leading the way for the Razorbacks was Daniel Gafford who had 21 points, 5 rebounds, and a steal.

Defensively, Arkansas is holding their opponents to an average of 66.2 ppg on 35.6% shooting from the field. The Razorbacks have a rebound margin of -2.2 and a turnover margin of 4.8.

FIU is going to push the pace on offense and try to force turnovers on defense and although they have had a bunch of success with that formula so far this season, the Golden Panthers haven’t played anyone as near as talented as Arkansas so far this season. Arkansas has been great on the defensive end as they currently rank 78th in scoring defense and 7th in defensive FG% and as they are a tough team to play when they are at Bud Walton Arena, I’m taking Arkansas to cover this large spread.

The pick in this article is the opinion of the writer, not a Sports Chat Place site consensus.
Previous Pick
Southeast Missouri State vs. Western Illinois - 12/1/18 College Basketball Pick, Odds, and Prediction
Next Pick
South Dakota State vs. Northern Iowa - 12/1/18 College Basketball Pick, Odds, and Prediction